The latest from Streetfilms explains how everyone, especially motorists, can benefit from taking road space away from cars:

Boris Johnson promised to “smooth the traffic flow”.  It’s a vague policy which could be interpreted in any number of ways, and used to support a great variety of often conflicting policies.  I think when most people imagine a “smooth” traffic flow, though, they do not think of high motor vehicle speed or great motor vehicle capacity.  They think of reliable journeys.  Consistent journeys.  They could be reliably slow and consistently congested if those are the prevailing conditions.  And that’s fine.  The point of things being “smooth” is not to shove more people though the system in shorter times.  It’s to eliminate surprises.  A “smooth” flow means that deliveries leave the depot at the same time each day and always reach the shops on time; people get the same bus each morning and are never late for work.  Most people, I think, would interpret “smoothing the flow” as a move away from the impossible fantasy of solving congestion, to a new policy of reducing random one-off congestion incidents — of making congestion a little more predictable.  Businesses can plan for the predictable.

The biggest cause of unpredictable congestion is crashes.  Crashes are themselves frequently caused by excessive speed and complicated road layouts.  Road layouts that require lane-changing and lane-merging, especially.  Things like this: 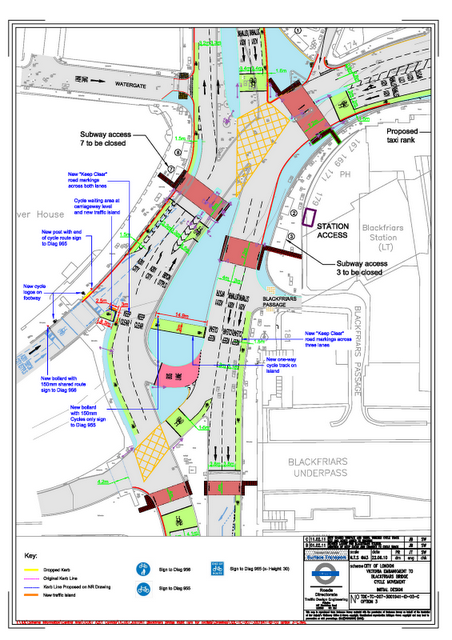 Consider the southbound carriageway of this proposed TfL road design.  Vehicles from two roads feed into the carriageway and have to sort themselves into two southbound lanes and a right-turn lane.  The drivers of those vehicles will have to negotiate with buses that will be crossing all of the lanes from their left-hand-side bus stop to their own special right-turn bus lane.  They will need to be checking for the bicycles which have to share their lanes, and which may be wobbling out of the under-size bicycle lane (where it is provided); pedestrians at the crossings and islands; and bicycles which are dumped in the road from a perpendicular bike lane.  Certainly many of the drivers of those vehicles will choose to swerve around such obstacles, taking advantage of the raised 30mph speed limit, rather than slow down for them.  And after enjoying a couple of hundred yards with two lanes through which to meander, motor vehicles will all have to merge into a single lane — just at the moment that they are all racing away from a set of pedestrian crossing lights — because one of their lanes becomes a bus lane at the south end of the new layout.  All this high-speed lane changing and merging is a recipe for crashes.  Unpredictable congestion.

Indeed, even when it doesn’t result in crashes, the waves of braking that follow a lane change or merge still causes “lumpy” traffic.  (Tom Vanderbilt’s blog and book explain the phenomenon and its subtleties excellently.)

I would suggest to TfL, and to its chairman, that a road design like this could conflict with the mayor’s election promise to “smooth” the traffic flow.  But I know they would come back with the perfect solution.  They would remove the bus lane restriction on Blackfriars Bridge.

In the meantime, we have one day left to contribute to the “engagement” on this road design.