Despite journalists who talk of a cycling “community”, and those beneath them in the bottom half of the internet talking of cyclists and all the evil things that cyclists do, people who use bicycles are a diverse bunch with diverse styles and, as is frequently demonstrated, diverse opinions. But I hope there is one thing on which British cyclists might be able to agree.

The whole agenda is nothing more than a mix of half-baked ideas. … Consider the emphasis on HGVs. Fit them up to prevent “cyclists from being thrown under the wheels”.

Well, the exact approach to dealing with trucks was an issue we raised with the The Times at the Street Talks brainstorming session. On entirely friendly terms, of course, and all are agreed that there were problems with trucks to solve — they are, after all, a disproportionate source of danger and contributor to the barriers to cycling. Where I think Forester can unite us is in what he says next:

Crazy, who or what is it that reaches out and throws cyclists under the wheels of HGVs? While I don’t know the statistics from detailed studies, and apparently nobody knows, I suggest that the main problem is that cyclists throw themselves under the wheels of such vehicles during turning movements.

Well the Americans might not know much about the problem with trucks, but we know plenty, both from reviews like Morgan et al, and from the cases which make all too frequent headlines. 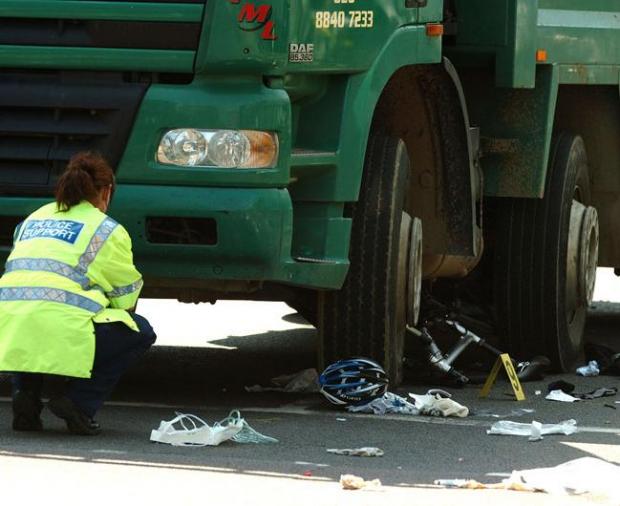 Eilidh Cairns, an experienced commuter cyclist, was killed in February 2009, when a tipper truck driven by Joao Lopes ploughed over her from behind. Lopes was fined £200 for driving with defective vision, but the death was ruled “accidental” and he was free to kill again.

Catriona Patel, an experienced commuter cyclist, was killed in the Monday morning rush hour in June 2009. Pulling away from the Advanced Stop Line as the lights turned green outside Oval Station, a 32-tonne tipper lorry driven by Dennis Putz accelerated into her. Witnesses had to bang on the side of the truck before the oblivious Putz stopped. Putz was a serial dangerous driver, was hung-over — 40% over the limit — and talking on his mobile phone. He denied a charge of causing death by dangerous driving, but was sentenced to 7 years for it.

Brian Dorling, an experienced commuter cyclist and motorcyclist, was killed in the morning rush hour in October last year. A tipper truck turned across his path at the Bow Intersection. They had to use his dental records to identify him.

Deep Lee was struck by a lorry from behind as the lights turned green; Svitlana Tereschenko was killed by a tipper truck whose distracted driver failed to indicate before turning and driving over her. Daniel Cox was run over by a truck which did not have the correct mirrors and whose driver had pulled into the ASL on a red light and was indicating in the opposite direction to which he turned.

Try telling Ian McNicoll that his son Andrew, well versed in cyclecraft as a road and commuter cyclist, should have known better than to throw himself under the wheels of the articulated lorry that side-swiped while overtaking him in Edinburgh. Try telling Debbie Dorling that her cycle and motorcycle-trained husband should have behaved differently at Bow. Try telling Allister Carey that the death of his daughter Eleanor under the wheels of a lorry in Tower Bridge Road was her own fault.

The cycling “community” in this country might not always agree about the most appropriate or desirable method for reducing exposure to danger and its role as a barrier to cycling, but I think at least one thing can unite us: anyone who, knowing little about the world beyond California, says that the problem here is all cyclists’ own fault for throwing themselves under the wheels of trucks, is an asshole who can keep his discredited half-baked ideas to himself.

39 thoughts on “John Forester is an asshole”