In writing up the Cycling Embassy’s AGM infrastructure safaris, I said some nice things about Bristol. I think it’s the least worst city for getting around by bicycle in Britain. But despite the good things that Cycling England’s demonstration city project achieved, and the city council’s boasts about it, Bristol has failed to become a cycling city where it most matters.

The city was named and shamed by The Times for one of the worst junctions in the country, the St James Barton roundabout — aka The Bearpit — on the inner ring road. Four lanes of circulating traffic forming a formidable barrier to getting into the city centre from the arterial roads that terminate here. But while one wing of the city council considers new variations on the Great British shared facility — awkward kludges to work around the mistakes and omissions of the 1960s — another is independently working on “public realm improvements” just yards away, each apparently oblivious to what the other is doing. And neither of them seems to have a clue that this is a “cycling city”.

Regular readers might already be familiar with the street that they wish to improve: the A38, one of those arteries terminating at St James Barton. It’s variously Stokes Croft, Cheltenham Road, and later Gloucester Road. It’s the artery explored in this infrastructure safari, and, a few miles up, the high street that was the subject of this post on how people get to their local shops.

Heading north out of town, if you survive St James Barton, you’ll need to turn onto the bus lane, underneath 51°02, onto Stokes Croft (technically North Street for the first hundred yards or so), and then try to dodge the buses which are overtaking you on the bend ready to immediately pull into the bus stop that’s hidden just behind 51°02’s stilts…

…while on the southbound carriageway a single lane widens into four for stacking at the roundabout, much having been bulldozed out of the way for them half a century ago. Continuing northbound, a section of extra-wide footway — spare space set aside when there were ideas that this road should one day be even wider — is mostly lifeless in this land of the motor… 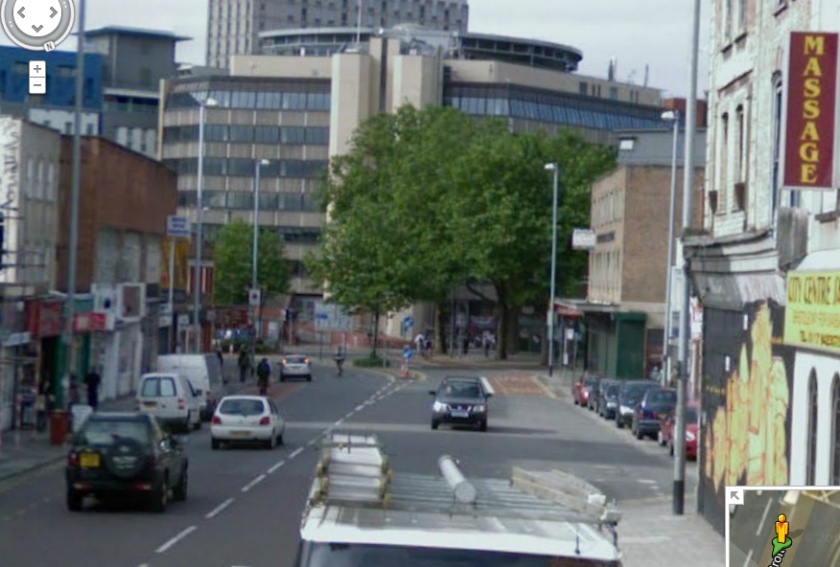 …and finally, the section of sprawling highway ends abruptly where the old street dimensions and frontages survived the bulldozers… but suffered the years of planning blight from threats of road widening that left them in a poor state of repair and, when occupied at all, usually occupied by the city’s less wholesome businesses.

There’s no doubt that this is a pretty foul place for pedestrians, with a cloud of fumes coming off the four lanes of stacked traffic waiting for the lights; and the cars speeding around the blind bend from the roundabout; and the acres of dead space in the non-standard road layout that encourages non-standard manoeuvres. So the city council are consulting on “public realm improvements” for this area, hoping to bring the pavements alive with people and street cafes. So what are these improvements?

Taking out the bus lane to widen the footway, leaving cyclists with that thoroughly discredited facility, the 1.5m on-carriageway cycle lane, leading cyclists into exactly the same deadly conflict with the bus stop as before, and providing the ever delightful environment of buses pulling in and out inches to the left of you, speeding cars and trucks inches to the right of you.

And acres of dead carriageway replaced with acres of dead pavement, and again, that widely tried and widely failed 1.5 metre cycle lane, a gutter sandwich between traffic and the driver-side doors of the loading and parking bays. But it’s OK, the designers have thought about the needs of cyclists: the loading bays are supposedly  “wide enough to create a safe buffer between car doors and passing cyclists”. And a raised table will apparently slow drivers down as they nudge the steering wheel slightly to turn across the cycle lane into that grossly distended side road, King Square Avenue, so that’s alright then.

No doubt the trees and fancy fashionable paving will make this a less awful place to be on foot, but I’m not sure people will be rushing to set up pavement cafes next to the totally unchanged four-lane stacked traffic. It’s treatment of symptoms without addressing the real causes of the problems here.

More to the point, it’s still useless if you’re on a bicycle, because, like everything built by the city’s highways engineers, it’s designed with Britain’s useless guidelines and rules. And that’s why Bristol’s authorities can not claim to be administering a cycling city. The great things that have been achieved in the city can be attributed to either the few excellent hard working cycling officers, or to the consultants and contractors bought in and guided by Cycling England during the demonstration city project. But the cycling office appear to have been put in a silo, able only to get paths put in where they won’t inconvenience anybody — through the parks, behind the allotment gardens, under the electricity pylons; and the hired expertise left when Cycling England and the demonstration city project went up in the bonfire of the quangos. The rest of the council seems to be as oblivious about cycling as any other authority in Britain: the highways department are as obsessed as any other with traffic flow and junction capacity; transport officers are just as obsessed with buses; parking enforcement just as powerless to keep cycle lanes clear; police just as indifferent to dangerous driving. It’s not a cycling city, it’s a city with a cycling department.

You can see it when a southern bypass is proposed with a 1.5m wide pavement cycling facility; when the flagship cycle path is suggested as the perfect location for a BRT line; when quaysides and riverside paths — crucial for linking together the network of traffic-free cycle routes in the city centre — are left impassable for years due to construction work (or lack of it); and every time the highways department puts in another 1.5m cycle lane in the gutter underneath the car parking.

All of the candidates to be Bristol’s first mayor say they want to be in charge of a cycling city (even if one of them doesn’t mean it) and all of them recognise that there’s a way to go before they can claim to be so. If they’re to get there, they need all their officers behind them, not just the few in the cycle paths office.