I found this post in my drafts, from way back in october 2010, when this blog and my thoughts on transport policy were young. I thought it was really time to chuck it out and get it out of the way. I think it was probably waiting for another illustration I’d had planned but never shot, or something…

Private cars (including taxis and minicabs) for transporting people make up perhaps only a half of the inappropriately used vehicles clogging our city centres on weekdays. Nor are they the most polluting of these vehicles. Fighting car and taxi dependency and fighting for support for alternative modes of transportation for people will not alone make our cities liveable again. 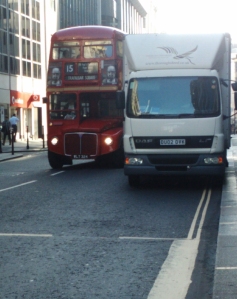 This week, because somebody drove into me last weekend, I have mostly been catching up with the pedestrian and bus passenger’s experience of central London. On Monday morning, already late (I always forget that a half-hour bike commute takes an hour on public transport) and not up to hobbling even the short distance from Cannon Street to Grays Inn Road, I waited outside the station for a number 17. I could see the number 17. It was just down the end of the road at Monument Station. But it took a while for it to arrive on account of the long line of vehicles parked along Cannon Street’s double yellows, beside the “no loading” markings. Vehicles like Thoroughshred‘s DU02OVK.  (This van’s hazard lights of course indicated that the vehicle had temporarily broken down, and the driver was visiting a nearby friendly office building who helpfully supplied the box of old documents that fixed the van’s immobility.) Note that Thoroughshred care for the environment by using “low-emission vehicles”. As my bus was finally approaching, Office & General Cleaning had an unfortunate incident on the opposite side of the road: the driver quickly braked and pulled in on the double yellows, firing up his hazards. What were the chances, two vans broken down on either side of the road, blocking the busy bus routes of Cannon Street? All counted, there were seven unfortunate van drivers who had broken down on the yellow lines of Cannon Street that morning, and twenty three on the two miles to Grays Inn Road.

(Office & General Cleaning, it should be noted, use low-sulphur vehicles, and make the bold and scientifically illiterate claim to have eliminated all chemicals from their cleaning “regime”. This makes their business “environmentally sustainable”.)

One particularly worrying breakdown had occurred on Ludgate Hill, where Eden Springs were stopped, hazards flashing, on the double yellows in the eastbound bike lane just below St Paul’s. In an attempt to get the vehicle working again, the driver was bravely unloading large bottles of water onto a trolley, and an adjacent office must have selflessly agreed to store them for the company. Eden Springs are clearly doing important work in London: as they point out, water is vital to the health of office workers, and it’s not like you can just turn a tap and expect it to come pouring out like magic. Eden Springs have a philosophy: to be an environmentally responsible partner. (After livetweeting my bus journey, I discovered a new follower: Eden Springs. Somewhere somebody is living their PR career dream.)

Elsewhere, on New Change, a van sat at the lights full of towels and tablecloths that it had collected from restaurants to be cleaned on an industrial estate on the north circular. On Exhibition Road they delivered paper cups and single-use wooden spatulas to the museum cafés. On Great Queen Street a lorry swapped around the furniture between conferences at a hotel. All over Soho, bars took deliveries of ice cubes.

Whenever one suggests that the price of the congestion charge should be vastly greater than it is, that there should be stricter limits on the vehicles that are allowed into city centres, or that a significant proportion of zone 1 roads should be closed to vehicles entirely, one is asked what one would do about all the people who simply have no choice but to drive into Central London: the businesses who need things delivering. Vans are essential and the costs they’re already asked to bear are hurting, we’re told.

Well if businesses in the centre of the city are choosing to have ice cubes and water driven to them in vans instead of turning on a tap and buying a £200 ice machine, having contract cleaners cart mops around instead of investing in a broom cupboard, and sending their laundry to a barn on the orbital instead of putting it in the washing machine, I say the costs aren’t hurting enough. Or rather, businesses are not paying their bills. Because, as is amply evident on any journey through central London, the main reason such ludicrous operations manage to survive is by breaking the rules and dumping the consequences on the rest of us.

Business is one of those fields that I’m really not competent to begin to comment on — and christ can I think of nothing I’d like less than to be so. But I’m happy to speculate wildly anyway — content that on this topic I don’t really care if I’m spouting embarrassingly simplistic crap — about how Britain, and London especially, built itself into its unhappy van dependency. This situation appears to be the outcome of the pursuit of an extreme outsourcing. The vans of companies specialised in simple everyday tasks, like freezing water and washing tablecloths, serve asset light and asset stripped “enterprises” — owners of nothing, investors in little, employers of nobody, constructing products and services entirely out of the leased and the subcontracted.

Whether that’s clever responsible responsive flexible capitalism or dangerous short termist profiteering that contributes nothing of any real value to the lives of our cities is too far outside of my field even for my wild speculation. All I know is that it only works by dumping its costs on society in the form of the traffic in our towns: the vans that we are reminded are so essential.

10 thoughts on “On van dependency”