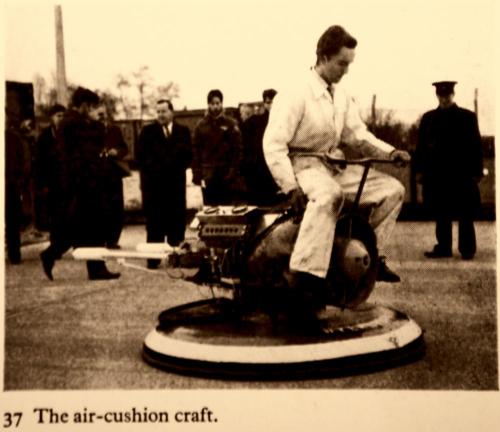 Continuing the 1963 Buchanan Report on the future of transport in towns, over the page:

A development which may offer a more direct challenge to the motor car, assuming the problem of noise can be overcome, is the air-cushion craft.  It seems to give scope for development of a small personal machine, useable perhaps eventually on ordinary pavements as a substitute for walking.  Yet it may be questioned whether it would really take this form, whether the urge to put a perspex cover over it for weather protection, to use it at higher speeds, to add extra seats, and to affix luggage containers, would not soon convert it into a motor car in all respects but the possession of wheels.

[…] It may have a different source of motive power so that it is no longer strictly a motor vehicle, it may be quieter and without fumes, it may be styled in some quite different way, it may be produced in smaller forms, it may be guided in certain streets by electronic means, it may have the ability to perform sideways movements, but for practical purposes it will present most of the problems that are presented by the motor vehicle today.

Everyone seems to have forgotten that there were already multiple major problems with our transport and town planning long before we discovered our CO2 problem.  We need a solution to them all, not an excuse to ignore all but one.

(With a tip of the hat to Carlton Reid, whose joke I’m stealing.)

In pictures: Britain’s once proud stations 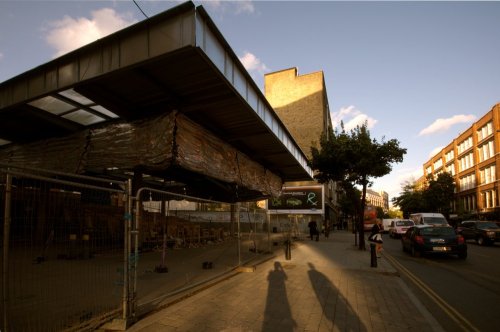 A petrol station on Clerkenwell Road has been turned into a cinema.  This is a disaster; an act of war on the Motorist that must be condemned.  The BBC’s Andrew Sully explains why this epidemic of sudden garage death should be such a worry to us.

Firstly, there’s the fact that the petrol station, like the post office and the village shop, is a traditional hub of the community.  I don’t know about you, but I have many fond childhood memories of trundling down to the outskirts of the village to pick up the daily pint of engine oil and sometimes, as a treat, one of those T-shaped plastic things with the rubber and sponge that everybody suspects is supposed to be useful for something, possibly in relation to the windscreen, but nobody has ever quite worked out what.  Certainly, in my village, when given the choice between hanging out by the bus stop on the village green or standing about breathing in the fumes in Mr Whatshisname’s filling station, the local youths knew the cool place to go.  Everyone in the village knew Mr Thinggy, behind the counter.  He was like part of the family. 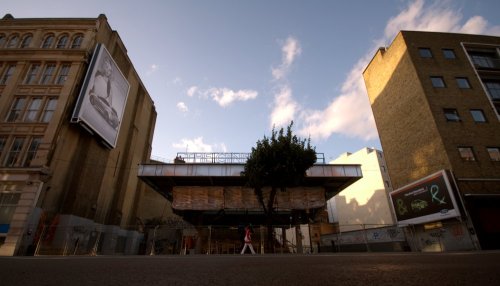 The Cineroleum: stealing petrol from the prospective drivers of the Alfa Romeo (advertised, left) and Ford Focus (advertised, right) - click image to embiggen

Ray Holloway, chairman of The Petrol Retailers Association, says: “Motorists are now noticing gaps in fuel availability and if it gets worse, as expected, they will certainly be inconvenienced when searching for a forecourt in some areas.”

Christ.  Not more inconvenience to the Motorist.  But this should not just be of concern to the poor hard done by Motorist.  This is an environmental catastrophe:

“And the environmental effect of having to travel extra miles just to fill your car is also considerable.”

Why can people not see that this is the only sustainable thing to do?

When Greenpeace closed down BP’s London filling stations last month, the newspapers reported that Motorists “understood the anger against BP but were annoyed at the inconvenience caused.”  What the newspapers, who are clearly all in the pocket of Greenpeace, refused to discuss is the fact that the Motorists who were inconvenienced by the protests would have to drive up to two miles further to fill up their tanks, possibly getting stuck in traffic on the way, and that this is bad for the environment.  The entire Greenpeace exercise was self-defeating, the Daily Mail commenters brilliantly realised, because it would cause climate change, not solve it.  What an embarrassing mistake for the protesters.

The logic is simply indisputable.  We must end the War On The Motorist in order to save the planet.  That means more roads, bigger roads, abundant free parking, and the extension of government subsidies for petrol stations.

As the BBC article concludes:

Whatever drives independent petrol station owners out of the business, even non-motorists miss them when they’re gone.

Indeed.  When you think of the alternatives… 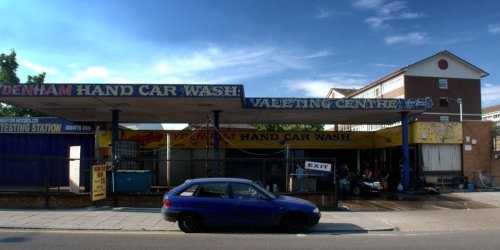 TfL’s consultation on proposed changes to the Congestion Charge ends today.  This is your final chance to send in your comments.

Briefly, the notable proposed changes are these:

Roughly, my comments on these were:

I’m not really sure what I’m asking the mayor to do.  Strengthen the CCharge as an interim solution, until the problem can be tackled properly, I think.

(Tip of the hat to Clean Air London, @CleanAirLondon.)