It’s 1.1 miles north to south.  It’s 0.9 miles west to east.  A small and dense market town of just under 7,000 people.  There are a few small villages but also several large towns all around it, many a short hop away on the mainline railway, so its wider catchment population is small.  There is a big Tescos and a little Co-op in the centre.  All the pubs, restaurants and take-aways that a market town needs.  Even a market.

Even taking into account the winding streets and difficult to penetrate 1970s cul-de-sac road layouts, no front door is more than 0.85 miles from the shops and services. 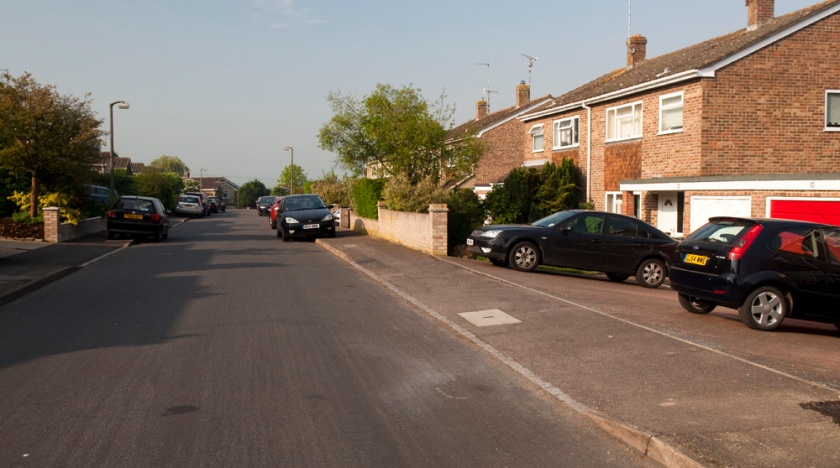 This typical residential cul-de-sac is 0.6 miles door-to-door from the station and food shops.  The houses at the end back on to fields.  Every house on this street has at least one garage plus driveway space for at least one car.  Clearly this is insufficient, since the cars are parked fully blocking the pavements on both sides.*

There are no pedestrians to complain about it. 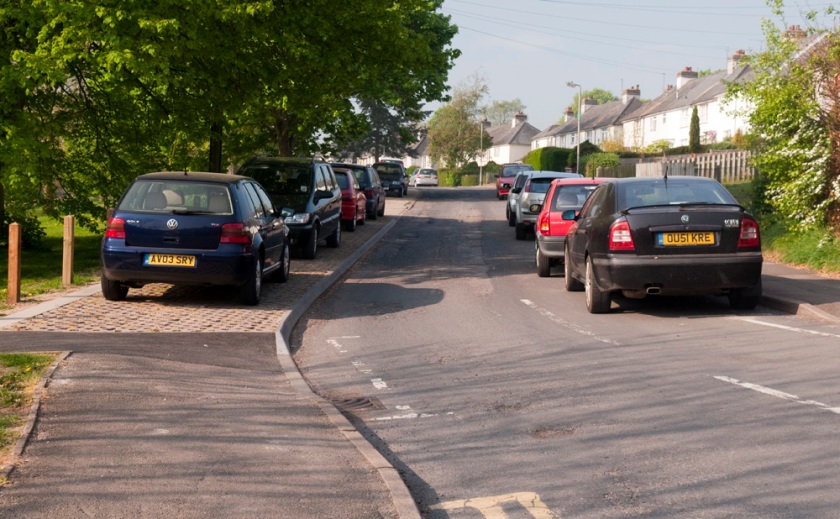 In a pedestrian-free town, you might as well make pavement parking official. 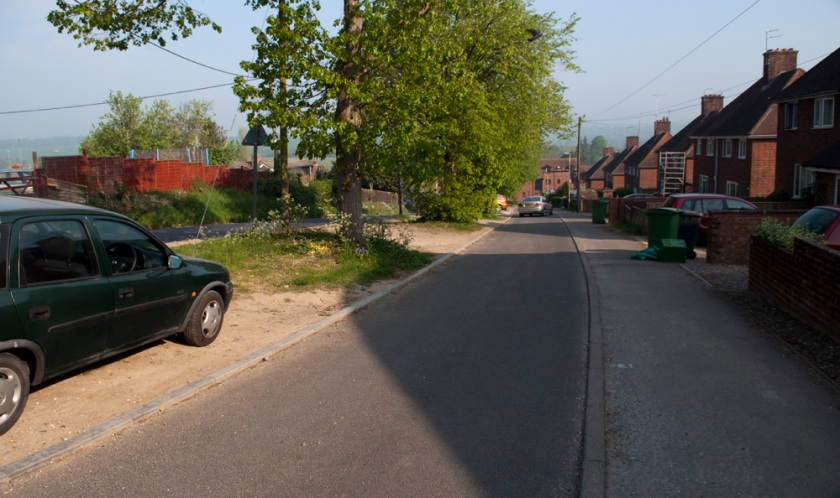 The road proper here is just visible on the left. We’re looking at a parallel service road for the houses.  They all have driveways, but that is clearly not enough.  Can you spot what has ruined the grassy area out front, where the kids could’ve played? 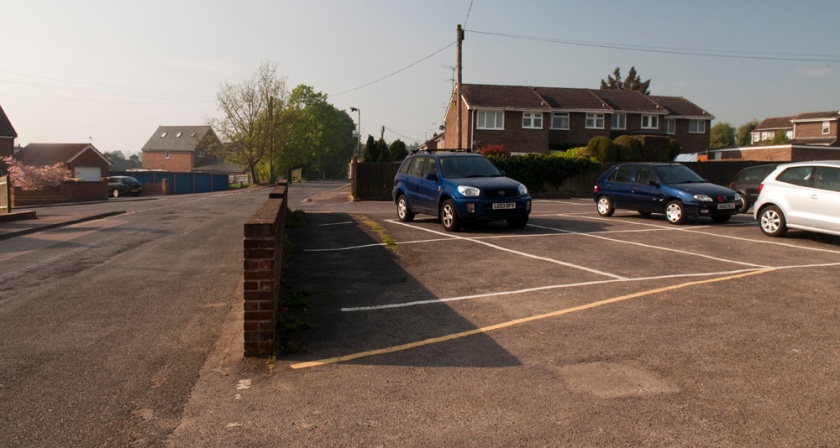 Clearly there’s a shortage of official and properly surfaced car parking areas.  Like here, ten yards behind where the previous photo was taken. 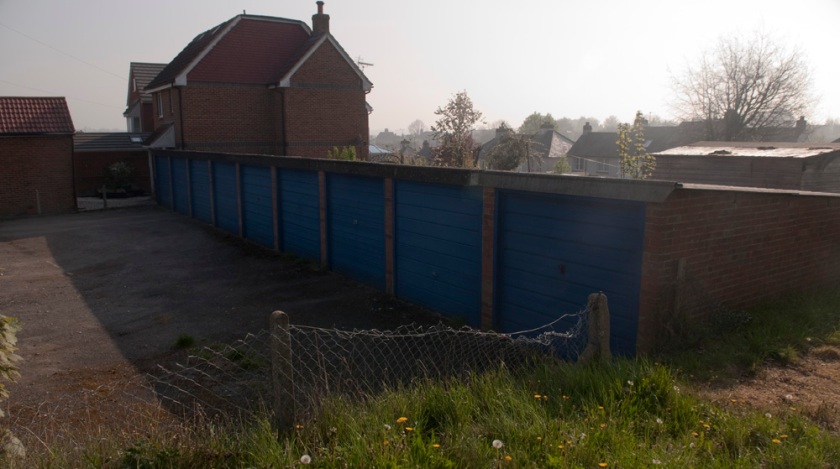 Or garages, as seen in the background of the previous photo.

Why so many cars, in a town where every shop and service is at most a five minute walk away?  Perhaps people drive simply because they can. 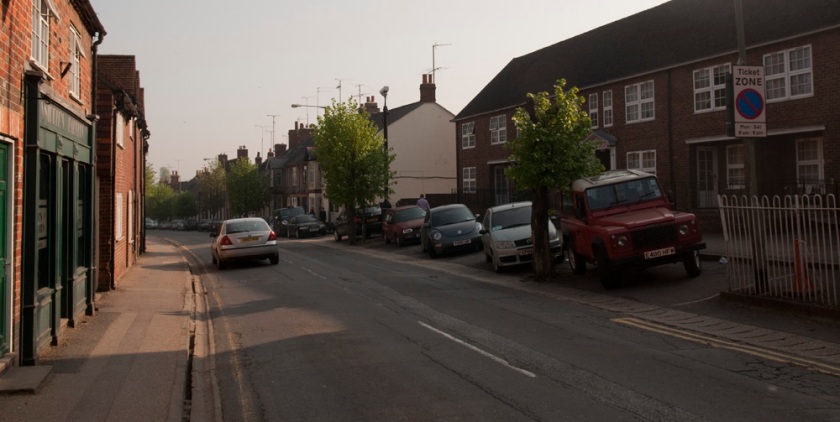 They can drive to the barber shop at the top of the high street. 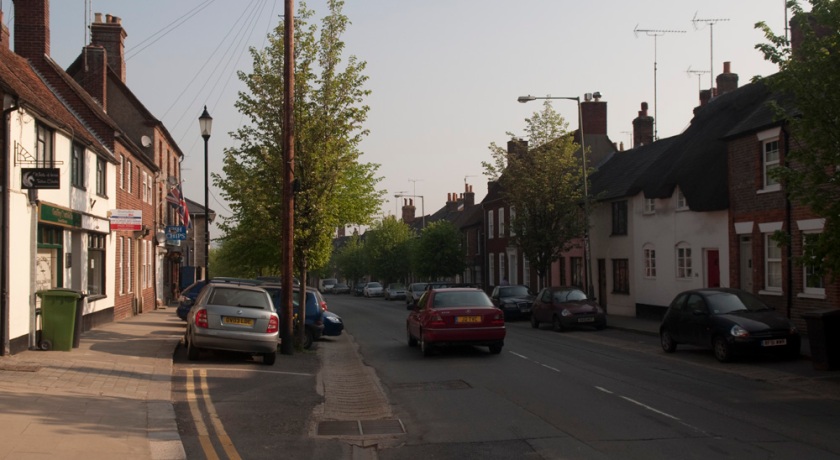 Then drive a hundred yards on to the chippy or curry house. 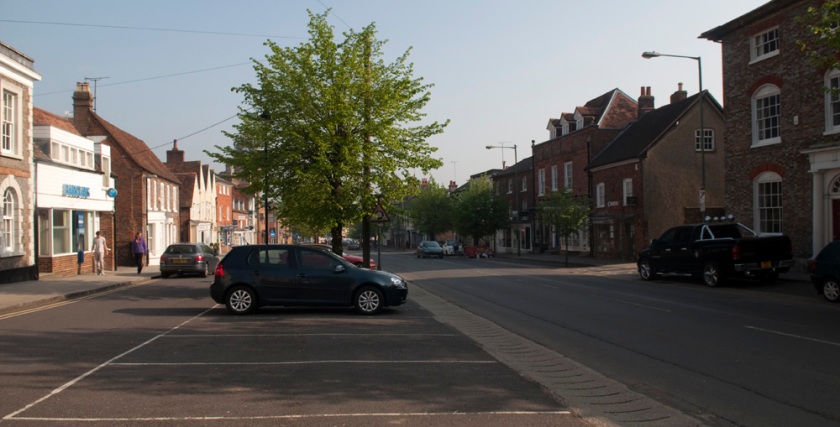 And another hundred yards further to the pubs and banks.  No need to worry about the double yellows if you’re just popping to the Barclays cash machine. 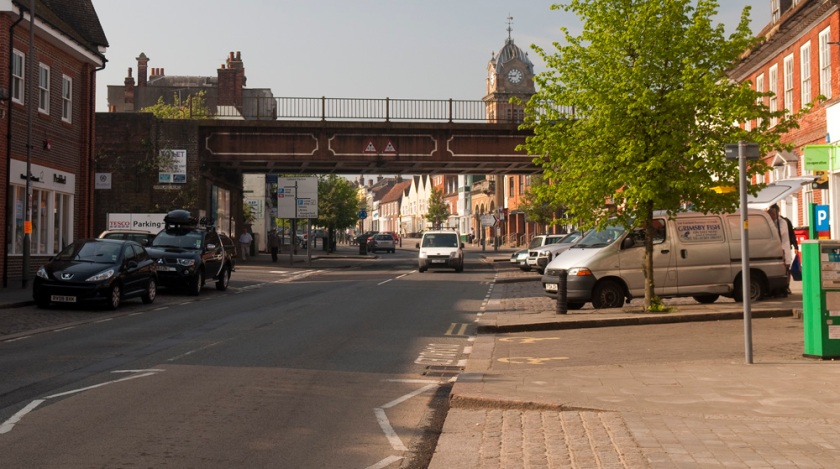 Then down under the railway bridge for Tesco’s car park or the street market — operated from the backs of vans.

But what if you get into town and find all of those hundreds of spaces taken?  Might you have to drive the half-mile home and abandon all ideas of shopping?  Well, the more adventurous and sporty types could use the 180 long stay spaces that are between 75 and 150 yards from the high street. 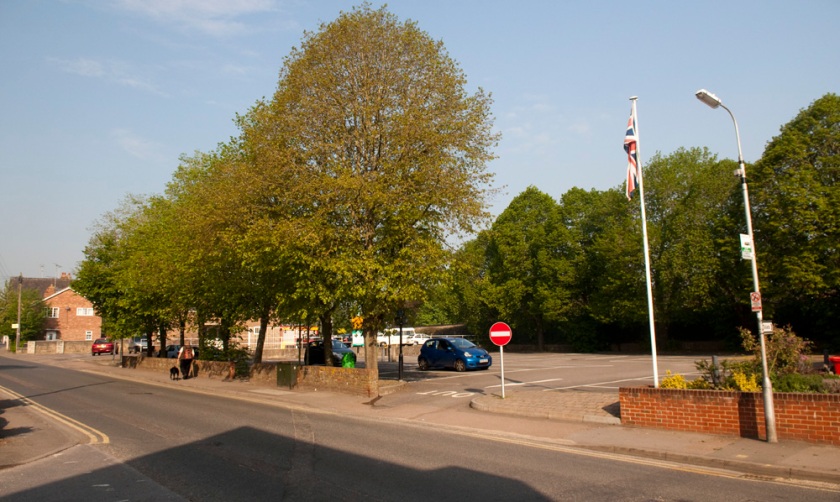 (There is a pedestrian in this photograph.  The only person I saw walking anywhere other than beside the shops on the high street.  Why is this person walking?  They have a dog to exercise.)

This is Hungerford, Berkshire.  It is three miles from junction 14 of the M4 motorway and mainline railway, perfect as a dormitory for commuters to Reading and London.  Much of its housing went up at around the same time as the motorway, built with a garage and a double driveway.

One could speculate that Hungerford’s pathological attachment to the car has something to do with the events of August 19, 1987, when Michael Ryan shot 16 random people dead on the streets of the town.  We know that people routinely judge themselves to be safe and secure locked up in their private metal box — ironically the most dangerous part of the average person’s day.

But I don’t think Hungerford needs any such explanation.  The people of Hungerford were not driven into their cars.  People already attached to cars drove into Hungerford, saw that it was convenient for the M4, and took over the town.  The population of this commuter town is a self-selected sample of people who drive everywhere, to whom the idea of walking just half a mile would never even occur.

My experience of the town is limited.  But from what I’ve seen, Hungerford is the most conspicuously car sick town in Britain — and I’ve seen a lot of car sick British towns.  The problem is all the more conspicuous because there are no dual carriageways.  No multi-storey car parks.  No sprawling suburbs.  Just everybody making half mile car trips.  Because anything else would be abnormal.

* Aside: Eric Pickles and Philip Hammond announced in January that they were ending the War On The Motorist by removing the cap on car parking spaces in new build houses.  They argued that the cap did nothing to prevent people owning cars and driving, it just meant that people cluttered the streets and verges and pavements with their second cars.  “The Government believes these rules […] increased unsightly on-street parking congestion – putting the safety of drivers, cyclists and pedestrians at risk.”  Well the houses in this photograph were built long before Labour’s War On The Motorist.  Every house on the street has room for at least two cars parked off street in garages and driveways.  Some have room for more.  The logic of Pickles and Hammond therefore proves that there are no cars parked inconsiderately or illegally on the pavements on this street.  Provide 2-4 parking spaces per house and the streets become a paradise for cyclists and pedestrians.

Last month I seemed to simultaneously hit a mark and touch a nerve with I don’t pay road tax.  Nik raised some dissent:

I do have a bit of an issue with your post painting all motorists as fat, lazy, inconsiderate, unable to change, destroying the environment, and so on. I do have a car, which I use to travel longer distances, particularly to countryside areas that don’t have train services, or whose train services are so inconvenient that using them is impractical. And I do even, occasionally, drive in London. […] I don’t like the ‘at war with motorists’ tone, which is neither constructive nor reasonable, and risks dogmatically painting all motorists with the same brush, and also ignores the fact that outside of densly populated areas such as London, public transport is often patchy to non-existent, and people often have no choice but to drive.

The issue here is the Nik seems be identifying himself as a Motorist.  He seems to have fallen for the line of the tabloid and Top Gear media: that there are Motorists, and there are a few lonely losers and hippies who are either too poor or too misguided to drive.  In fact, just as there are several different kinds of bike user, Jillian Anable’s 2005 paper, ‘Complacent Car Addicts’ or ‘Aspiring Environmentalists’? Identifying travel behaviour segments using attitude theory (PDF link), identified six distinct attitudes to the car amongst day-trip travelers questioned at two National Trust properties near Manchester.

Motorists — the active advocates and pillars of Motorism — amounted to less than half of the car owners and drivers.  Motorists themselves can in turn be divided into two categories.  The Die Hard Drivers “are fond of cars and car travel, believe in the right to drive cheaply and freely and have negative feelings towards all other travel modes.”  Meanwhile, the Complacent Car Addicts “admit that the use of alternative modes is possible, but do not feel any moral imperative or other incentive to alter their car use.”  That is, there are lazy and selfish Motorists, and then there are actively evil Motorists.  No blog post is ever going to change their minds about using a car.

The section that Anable unfortunately chose to call Malcontented Motorists, are in fact not Motorists — not advocates of Motorism — at all.  Drivers in this section ” perceive a high number of constraints to the use of public transport despite feeling increasingly frustrated and unhappy with car travel and believing that they have a moral responsibility to change behaviour.”  They sound very much like the people for whom “public transport is often patchy to non-existent, and have no choice but to drive.”  These people don’t need a blog post to change their minds: they need a bus or bike path that goes where they need to go, or a better planned town that still has local jobs and shops.  (They might appreciate a blog post that helps them achieve that, though.)

The final section of Drivers are the Aspiring Environmentalists, who “have already substantially reduced their car use largely for environmental and health reasons but appreciate the practical advantages of car travel and are thus reluctant to give up ownership entirely.”  I am guessing that Nik is in this category.

Here are the numbers, also including the remaining categories — those who don’t drive out of choice (5) or necessity (6) (remember though: while the 6 categories probably apply throughout the population, albeit with blurred boundaries, the proportions given here are specific to the sort of people who decide to visit National Trust-owned historic buildings and gardens near Manchester on a certain day half a decade ago):

Acknowledging the varied attitudes of people who drive, the relative frequencies of those opinions, and the receptivity of those people to change their opinions and behaviours, is important for understanding things like the demand for speed cameras and segregated infrastructure (and the likely scale of opposition to these things), and the best way to pitch transport and town planning campaigns.  More on those issues in later posts.

As for whether declaring a “war on the Motorist” is helpful or constructive: our “about” page explains where the phrase came from, and our tongue-in-cheek adoption of it.  If a reader actually believes the tabloid reports of the “war”, I don’t think there’s much we could ever do to help them. Motorists are not our audience, and were never intended to be.  But we welcome all you other car users as allies, fellow victims of bad planning and policy, intelligent enough to recognise the absurdity of the idea that there has been a “war on the motorist”.