The Cycling Embassy went to Bath and Bristol for the AGM, and around the discussion and decisions for the future, we had fun riding around a couple of my favourite cities pointing at the nerdy details of the infrastructure, seeing if there was anything to be learnt about what to do and what not to do. I promised to do write-ups of them, and decided to experiment with using Google Maps as a medium for doing a photo essay tour.

You can take the tour by going through the pins in the left-hand panel, clicking them in turn to open the bubble with the information about each point of interest; alternatively, hide the panel, set your browser to full screen mode, zoom in at the Bath (eastern) end of the yellow line and start following it west, clicking the bubbles in turn for the information (some of them can be easy to miss when zoomed in, though). Or for a third option, click on the “KML” link to open it in Google Earth for easier zooming and panning around.

I prepared a lot of photos in advance (and then failed to prepare a blog post in advance), but didn’t manage to get everything. Thanks to As Easy As Riding A Bike and A Grim North for capturing all the photos that I’d failed to get.

If you like the format, I’ll do the other Safaris that way too.

Weymouth: on the right track, and the road to nowhere

It’s always sad to see a town’s residents asking for a bypass, citing the fact that their town centre is choked with traffic. Here’s some traffic heading south out of Dorchester, county town of Dorset, about to cross over the 1980s bypass and onto the main road to the seaside resort of Weymouth, six miles and a big chalk hill away. It’s as much traffic, or more, as there was before the bypass was built.* END_OF_DOCUMENT_TOKEN_TO_BE_REPLACED

What’s wrong with this picture?

I think somebody at Sustrans got a bit carried away with the B&Q catalogue. If you don’t fancy the diversionary routes around the side, you could just open the gates — and leave them open. Which rather makes one wonder: what’s it all for?

It’s NCN55 on the old Shropshire Union Railway at the edge of Stafford. If ever you want to discover what a lovely town Stafford is, follow the NCN55 from the station. It ends at Telford, at which point any town will look lovely in comparison.

I mainly go to Stafford because I’m a miser who prefers to take the £3.95 train tickets and ride an extra 20 miles, than to pay £88.00 for trains on lines that are more convenient for the places I want to go…

Sorry, I failed to post much because I’ve been on the road.  And sometimes the Sustrans paths. 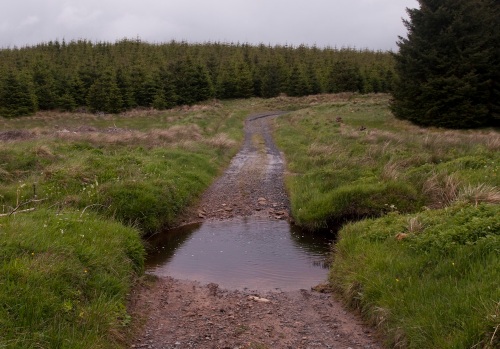 This is a forestry track, NCN 68, Kielder Forest, Northumberland.

I hesitate to criticise Sustrans because I know that they are good people, with an excellent idea — the National Cycle Network — and because they make delightful cycle routes when they are given sufficient money to do so.  I don’t want to harm Sustrans, I want them to do more, and I want them to be able to do it properly, with proper funding.

But this isn’t helping:

In Kielder Forest I met another pair of touring cyclists, with slicker tyres than mine.  They were following the NCN signs as far as the first town, where they would be seeking a road map for the remainder of their journey.  I met a pair of retired gents on racing bikes beside a road beneath the Woodhead route.  They laughed at me and my newly mud-caked tourer.

But I met nobody at all riding NCN 1 into Edinburgh, despite it being a sunny bank holiday sunday afternoon.  Clearly the locals knew better. 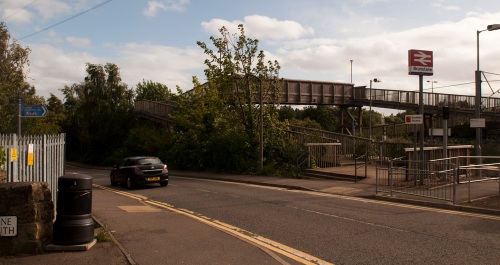 This is a railway station platform, NCN 1 Edinburgh. 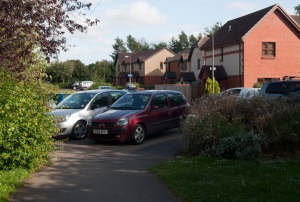 This is a car park in a soulless modern cul-de-sac. NCN 1 Edinburgh.

But after a very long and circuitous route through every industrial estate and cul-de-sac in east Edinburgh, it did seem appropriate that the signs eventually directed the cyclist onto a station platform.  When I eventually reached the pub, Kim Harding laughed at me.

I know I’m not the first to point out that large swathes of the National Cycle Network are utter crap and can not possibly be defended as “cycle routes”.  And I know the reasons that Sustrans give for including them in the network — that they are “interim standard”, designed to show on the map what the completed network will look like, and that if you read the small-print on their website you would know in advance that these “cycle routes” can’t actually be cycled.

But that’s bollocks.  People see signposts for cycle routes at the side of the road, not small print on websites.  And having followed the signs,  the cycling tourists I met were giving up.  Not giving up on the forestry track but giving up on the National Cycle Network and Sustrans, which is a shame because they will miss out on the second half of the route, which was delightful.  It’s not hard to find people who have tried the National Cycle Network, found it impossible to use — or worse, found it injurious to bicycle or to self — and to whom the NCN and Sustrans names are now more mud than the paths. 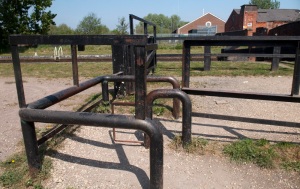 This is a device left over from the Spanish Inquisition, NCN 4, Reading.

Signing the railway stations and car parks of eastern Edinburgh as NCN 1 means that nobody will make it as far as the lovely quiet road through the wonderful Moorfoot Hills.  Signing the hiker’s steps over Woodhead as NCN 6 means that people will abandon the NCN before they reach the Longendale rail trail.  The loose rocky towpaths of NCN 4 stand in the way of the excellent Bristol and Bath Railway Path.  Excellent cycle routes are wasted because when you see an NCN sign, you can’t take the risk.

I know Sustrans want to put better cycle routes there — and are slowly getting there, as the funding trickles in.  But in the meantime, signing this crap as cycle routes does massive harm to Sustrans, the National Cycle Network, and the very ability to build those better cycle routes that Sustrans wants.  Crap like this fuels the myth that cycle paths are by definition poor quality and undesirable, a myth that remains powerful amongst some sections of cycle campaigning and transport planning.

This is a flight of steps, NCN 1, Edinburgh.

While on the road my extensive thinking time has been consumed with how to communicate effectively to other cyclists and campaigners the evidence for the benefits of proper cycling infrastructure  (more on that some other time). But any such attempt to communicate hypothetical high-quality facilities is going to have to fight all the way against people’s direct experience of crap like these routes.

These routes are not helping.  If it can not be cycled, take down the cycle signs.