I have a whole bunch of draft and outline blog posts from winter and spring that I was never able to find the time to finish off. To clear them out of the way, I’ve bashed out some half-hearted conclusions, and will post them this month.

Flicking through the pile of Natures that never got read properly, ready to be rid of them, I alighted on Gary Taubes’s opinion piece: Treat obesity as physiology, not physics. Bear with me while I appear to be completely off-topic talking science for a while.

…obesity is a hormonal, regulatory defect… it is not excess calories that cause obesity, but the quantity and quality of carbohydrates consumed. The carbohydrate content of the diet must be rectified to restore health.

Taubes set out his case that it is not useful to think of obesity as a straightforward energy in/out imbalance that causes weight gain, but that it’s in understanding that specific forms of that energy — carbohydrates, and sugars doubly so — activate our body’s own fat accumulation systems (through the well understood insulin process) where solutions lie. You’ll be familiar with it from all that “Atkins diet” and “glycaemic index” stuff: energy in the form of carbs bad; energy from dietary fat not so much.

Taubes thinks this is important stuff because:

…the overeating hypothesis has failed. In the United States, and elsewhere, obesity and diabetes rates have climbed to crisis levels… despite the ubiquity of the advice that if we want to lose fat, we have to eat less and/or move more.

There is an obvious response to this, but Taubes pre-empts it:

Yet rather than blame the advice, we have taken to blaming the individuals for not following it ‘properly’.

Suggesting that Taubes thinks that if only we change the advice from “eat less and exercise more” to his “don’t eat high glycaemic index foods”, the advice will be followed and we will then succeed in defeating obesity.

I imagine any “advice” we give will be useless, whether it’s based on physics or physiology.

Because while obesity is about physics and physiology — and psychology and genetics and half a dozen other fields of science — none of those things explain what is important: why there is more obesity now than in the past, and how to make there be less of it in the future.

The laws of physics haven’t changed in fifty years. Physiology, and the genes that underlie it, can change — but only by evolution over the course of hundreds of generations, not a few decades. Sure, our bodies have a mechanism for turning carbohydrates into fat stores. But they always have.

The focus is on the quantity of energy in and the quantity out because that is what has changed during the rise of the obesity crisis. By all means refine that to a specific focus on an excess of high-glycaemic index foodstuffs and a deficit of burning off specific sugars, but the problem that really matters remains fundamentally not one of physics or physiology but of our environment.

Taubes is right to treat those who “blame individuals for not following the advice properly” with contempt. But not because the advice is wrong. Because any “advice” — right or wrong — is going to be useless. This is not a problem that individuals have created for themselves, and it’s not a problem that individuals can be “advised” to solve for themselves. This is a problem of the environment that we live in: the types of food that are available to us, and the opportunities for an active healthy lifestyle that have been taken away from us.

Taubes later uses an analogy with smoking and lung cancer, and the analogy perfectly describes what’s wrong with the idea that obesity should be treated as a physiology problem. We know a great deal about the physiology of smoking-related lung cancer. We know how all of the many different carcinogenic chemicals within cigarette smoke flow through the lungs and pass through membranes into the cells. We know the chemical reactions that they participate in and how those reactions cause damage to the cells’ DNA. We know exactly which pieces of DNA damage result in the harmful mutations that transform them into cancer cells, driven to grow and divide. We know exactly how those mutations — to genes with names like RAS and RAF, and EGFR and a dozen others — change the shape of the proteins that those genes encode, and why that change of shape causes those proteins to misbehave. We know how these things result in the tumour evading the body’s inbuilt defences, how they hijack the blood supply to allow their expansion, and how they go on to invade and destroy neighbouring tissue and eventually escape and metastasise.

And knowing these things about physiology makes not the slightest difference to solving the smoking problem. Smoking-related lung cancer, like obesity, is a process of physiology. But it’s a problem of environment. And the most important lesson from smoking for obesity is that you can’t solve a problem environment with advice alone. Bad lifestyle choices are not an individual failing. Good lifestyle choices need an infrastructure to support them.

Call me a stereotype of the scientist buried in his own irrelevant little world, but it occurred to me that I know far more about how to manipulate the behaviour of transformed cell lines than that of people. The War On The Motorist™ was, of course, part of the great evil Labour project to change some of our more anti-social and self-destructive behaviours. So I thought I should probably find out about how these government-led behavioural change projects work.

There are, of course, all sorts of different ways that governments can try to reduce destructive behaviour, from outlawing it to asking nicely, via making the bad options harder and making the good options easier: 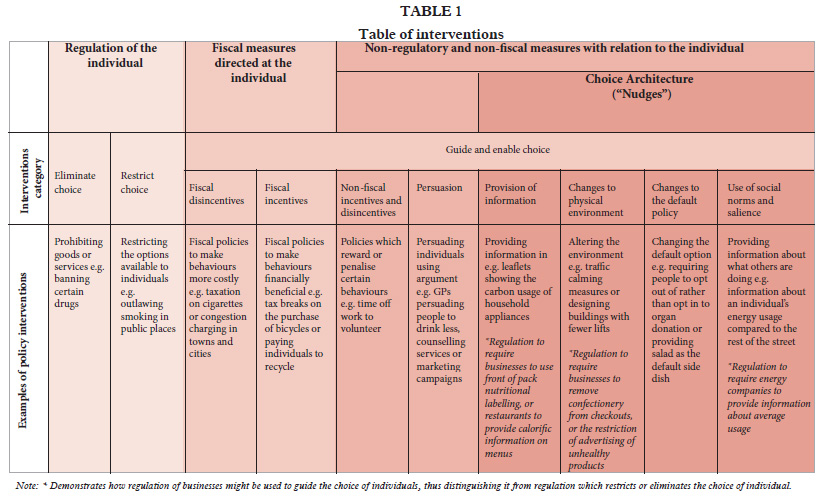 (This table, incidentally, neatly describes where the chaps at Cycle Chat slipped up when claiming that the rise in domestic recycling rates demonstrates that we can achieve mass cycling without cycling facilities: mass domestic recycling required a change in the physical environment — kerbside recycling boxes — exactly equivalent to the changes to the physical environment that are required before we can expect most people to cycle.)

The current government has an ideological bias against some of these varieties of behavioural change, and in favour of others.* Regulation and taxation is, of course, off the agenda. Rather, the government says it wants to influence behaviour by making it easier for us to make the right choices. It will do this, it claims, without making the bad choices impossible or even more expensive, and without even requiring our conscious deliberation. In the fashionable pop-economics terminology, it’s going to “nudge” us in the right direction.

The pop-economics writers have some favourite examples of “nudges”. Changing the environment by putting the fruit bowl in plain view and easy reach, without banning the junk food option. Or reducing laundry loads by changing the hotel bathroom signs from “hang your towel on the rack if you are going to reuse it” to “most guests hang their towels up and reuse them”. The environment or the information nudges people into making the right choice, without actually taking choice from them.

It all sounds very nice, but I wonder what the evidence says about the government’s approach? Does it really work? Are they doing it right? And what does it mean for transport and The War On The Motorist?

Luckily, the House of Lords Sci & Tech select committee are ahead of me. I like select committees. So far as I can tell, their job is to closely and carefully scrutinise what the government is doing (or failing to do), point out when the evidence indicates that they’re messing things up, and then to be completely ignored by government, media, and the unfortunate oblivious electorate. The HoL Sci & Tech committee produced a report a couple of weeks ago looking at the present government’s approach to behaviour change programmes, and in particular, the extent to which they were informed by the evidence of what works and what is worthwhile. I’ve been scrolling through it and will probably dump a load of thoughts on the blog this week.

My initial concern was that, though it speaks of nudges and wanting to avoid limiting choice through regulation, it is not regulation that the government is really trying to avoid: it is spending money on doing a job properly. We’ll see if I’m at all reassured by the time I’ve finished digesting it and posting about it…

* Of course, the far end of the libertorian wing will object to any and all government-led behavioural change, but I will assume for now that we all understand why we need it, and why we need it done properly