This week I’m trying to clear up the loose ends of threads I began and never finished, and get rid of some of the draft posts that I started but never polished…

Last week I posted about tracked hovercraft and straddling buses — a tongue-in-cheek look at how through the ages engineers have proposed ever more overcomplicated engineering solutions in an attempt to manage our out-of-control transport problems.  I assumed that my learned readers would get the point without labour.  WordPress.com very kindly picked it as one of their daily front-page features, though, which led to it receiving around 4,000 spam comments, including several dozen along the lines of “wow that bus looks awsum and wood solve all our problems make one for america!!!?! (p.s. here’s a link to my blog!!!11!)”.*

Well, actually my guess is that the straddling bus will be just another absurd transport solution that fails to achieve the things that it is designed to achieve.  The stated purpose of the bus is not to get cars out of its way, it is to get the bus out of cars’ way: the designers complain that the frequent stop-starting of buses means that they hold up the traffic behind.  It will probably fail to achieve much in the way of making car drivers’ lives easier because the designers are obsessed with engineering and don’t consider Motorist behaviour.

Here are a couple of random fascinating psychology factoids.  I wonder to what extent the bus backers have considered them in their models?

The cause of traffic jams is traffic.  Too much of if, behaving erratically.  We like to pretend that it’s bad engineering, because we can always fix engineering by replacing it with some different engineering.  And we like to pretend that it’s not the volume of traffic and the behaviour of drivers, because acknowledging this would mean giving up hope that one day the traffic jams will magically be solved.  But that’s the way it is: too many cars, too badly driven.  The straddling bus will probably not help congestion — at least, no more than a conventional bus on a conventional bus lane — because it will change driver behaviour in a way we can’t easily predict, but which (as described) will likely involve them slowing down and speeding up in chaotic waves as the bus passes them and they pass the bus.  It doesn’t sound like much, but these effects have a habit of amplifying themselves: the traffic between lanes will cease to be smooth, so cars will be changing lanes more, and this lane-changing contributes further to slowing things down, and also greatly raises the risks of accidents occurring.

Perhaps that effect will be marginal given all of the other existing complications and currents in the traffic flow.  Perhaps we’ll see other interesting unforeseen behaviour changes in the Shenzhen trial.  All that we can say for sure that everybody will be predictably surprised when drivers don’t behave in a simple rational manner.  Just like they were the last ten thousand times the solution to congestion was discovered.

The main reason the bus will fail, though, is the same reason that all urban roadspace provision schemes fail: create a new space for cars to drive in, and an equal or greater quantity of car journeys will be created to fill that space.  The cause of traffic jams is too much traffic.  Double the capacity for traffic and all you’re doing is doubling the size of the traffic jams.

* Not that I’m not grateful for all your valuable contributions to our discussions ;)

The Ministry of Transport’s 1963 Buchanan Report on the future of traffic in towns may have thought of jetpacks and hoverboards as a potentially real future for individual private travel, but it didn’t ignore public transport entirely.  Obviously, in 1963 the railways were obsolete, but the report suggested there was some scope for “multi-passenger units”, particularly ultra high speed devices on long journeys between dense population centres. 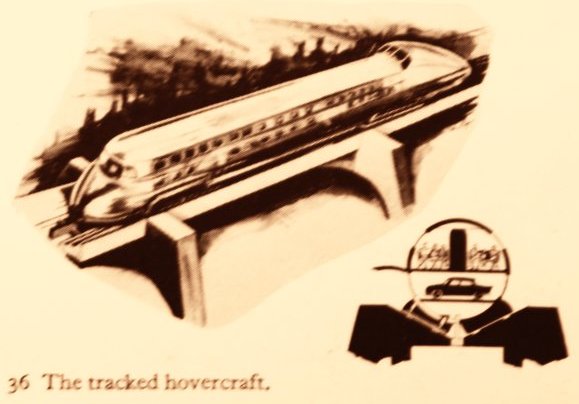 The most delightful is this fabulous art-deco “tracked hovercraft”.  Happy 1960s families, where the women all wear skirts and sit cross-legged and the men all read big important newspapers, drive their car into the bottom deck and sit in airline-style comfort on the upper deck.  It’s not clear whether “tracks” in this solution refer to rail tracks or to caterpillar tracks — the diagram appears to show elements that could be interpreted as either.  Perhaps it has both, for ultimate flexibility.

It is possible, of course, if serious technological studies were undertaken, that a whole range of new ideas for moving people and goods in cities would be produced.  It is indeed to be hoped that we are not at the end of our ingenuity in the matter.  The bus, for example, for all its convenience, does not appear to be the last word in comfort.  The travelator seems to offer much scope for development.  Continuously operating chair-lifts might be used in a highly attractive way between points of pedestrian concentration to augment existing means of travel.  Conveyor belts, pneumatic tubes, and pipelines might well be developed for the conveyance of goods, perhaps even justifying rearrangement of commercial processes to facilitate their use.

Monorails and moving pavements were the future of public transport in the 1960s — at least while we were waiting for our moon bases and space elevators.

Just some things to bear in mind when you consider the Shenzhen Huashi Future Parking Equipment Company’s (!) dream of the straddling bus:

For those unfamiliar with the city, Shenzhen neighbours Hong Kong; it was a fishing village right into the late 1970s when China created a “special economic zone” encouraging market capitalism here.  The city now has a population estimated to be 14 million squeezed into the limits of the SEZ, and is one of the fastest growing cities in the world.  It’s an entirely new city, conceived late in the motorcar era, and full of the wide boulevards you would expect in modern car dependent Chinese cities.

Shenzhen is the future.  At least, it must feel that way to the people who live there.  The Chinese are in the middle of great change: social progress, economic development, and technological revolution.  This is their 1960s, and more.  They’re putting men into space to prepare the way for the space elevators.

They’re also struggling with the sort of problems that European cities were struggling with the the 1960s.  In the picture above you can see how this little city street is too narrow to accommodate conventional buses.  Conventional buses keep stopping and starting, and this causes congestion as Important People in cars have to slow down and move over into one of the other four lanes available to them.  Therefore there is a need to invent the straddling bus, which will not impair Important Motor Traffic — those SUVs and executive saloon cars can happily drive under it (albeit, only having been considerably shrunk in photoshop).

It’s a genuinely clever idea.  You might wonder whether they’ve considered safety, and turning cars, and height clearance.  Of course they have.  The engineers have thought of everything and there’s no reason why it shouldn’t work in Shenzhen.  Just as there was no reason why hovertrains and moving pavements shouldn’t work…