I did mention that I quit my job six weeks ago, to be a full time bicycle touring landscape photographer for the summer, right?  I’ve been on a short break between tours — a few days to catch up with bike hacking before the next one.

One problem with being a bicycle tourist photographer is making sure you’re at the right spot at the right moment, not rushing off to your B&B or hostel before it gets dark.  For this reason, few photographers would think to work by bicycle, even though it has loads of advantages over the alternatives.

And there are a couple of simple ways around the perceived limitation of the bicycle.  One is a headlight, to enable you to shoot the evening light at leisure and get to your destination after dark — I’ve got the £70 Cateye EL610 Single Shot Plus on the right there, which properly lights up the lanes and has paid for itself.

The other is to wildcamp (where safe and allowed) at the subject of your shot, giving you the added benefit of dusk, dawn and night shot opportunities.  The only problem then, if you are out all day and all night, is how to keep enough charge in your phone to maintain twitter operations. 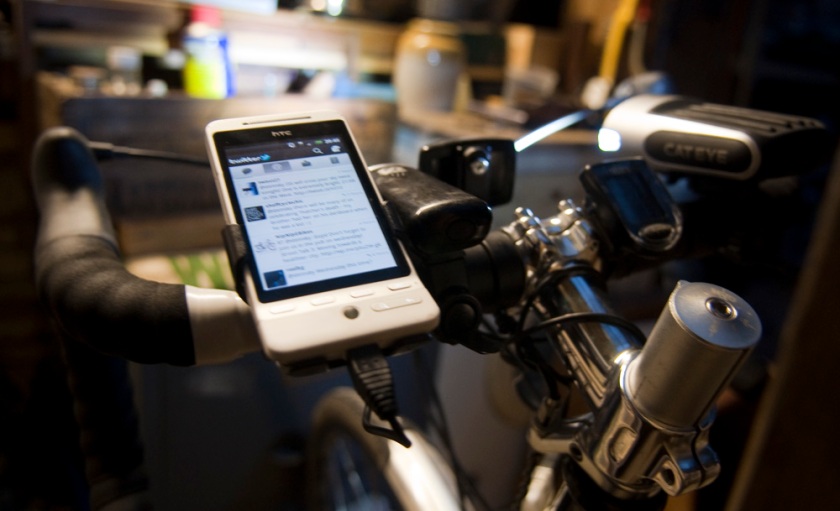 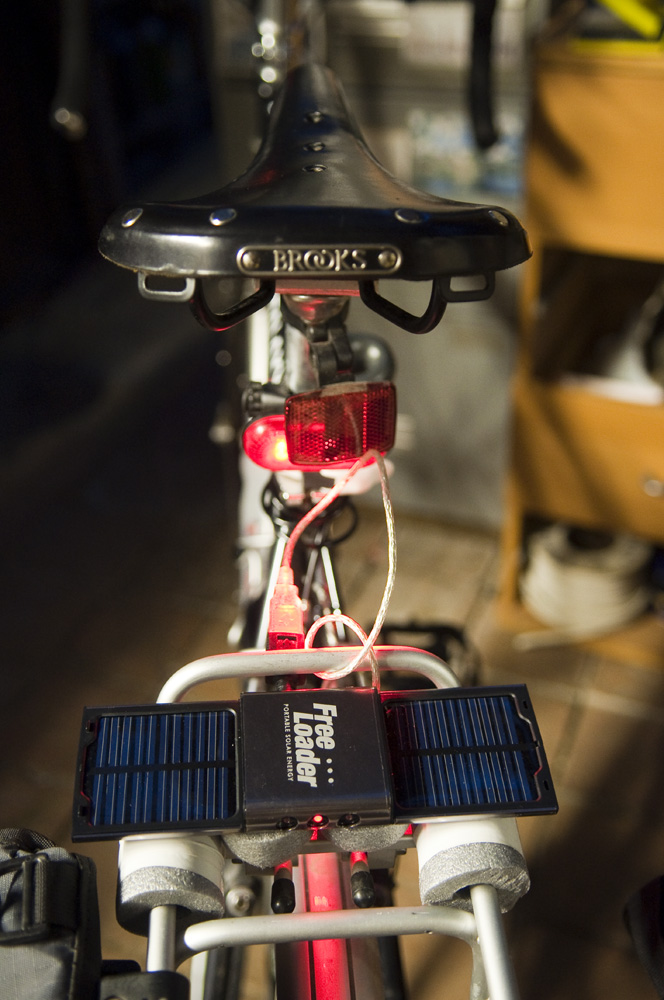 I could have the front wheel rebuilt/replaced with a dynamo hub charger, but that would probably cost over £100.  So instead I’ve got the bike all wired up with a delightfully sparkly old USB extension cable to connect the HTC Hero to some Freeloader solar panels (reduced to £15 at Best Buy) on a rack mount that I hacked together with pipe lagging, electrical tape and velcro.  The Hero gets through a full battery charge every day and the solar panels are small, so I’m not convinced that the Freeloader will be enough to keep it going by itself — especially on grey days — but it should do until I can find a cafe to leach from.  I will report back.

The solar panels, coupled with all the other wires and gadgets, introduces another problem: with all that attached, it really starts to look like you’re trying too hard and taking things too seriously.  I mean, somebody might think I’m a weirdo.  It needs some frivolity to detract from that.  So I finally got around to installing the Delta Airzound 2 Horn, a refillable airhorn.  It’s really poorly made: the only tube it fits is the seat post, which makes it pretty useless for quick response angry beeps; and the plastic in the bracket is so crap it almost fell apart when I screwed it tight — it’s currently hanging together by a thread.  It’s so cheap and shoddy it couldn’t do a better job at lowering the tone.  And it still makes a delightfully loud honk from between your legs.

None of this in any way makes the rider look like a massive nerd.