This post is part of a series, starting at “So what would you do here?”, on making utility cycling attractive in rural Britain.

I was sent a CPRE book last week. It reminded me of these lines from Betjeman:

Let’s say goodbye to hedges
And roads with grassy edges
And winding country lanes;
Let all things travel faster
Where motor car is master
Till only Speed remains.

Country lanes like the one below, a narrow 4km long link between the north-south A357 and the east-west A30, are currently “roads” — used primarily to get motor vehicles from one place to another. How could you separate bicycles and motor vehicles here without demolishing buildings, cutting down hedges and paving over the countryside?

It starts as a little street squeezed between two old shops in a tiny town centre:

And a few dozen private and housing associating homes from various periods of the 20th and 21st century, with many elderly folk and young families:

Out past the recreation ground:

And over the hill:

Through a junction with poor sight lines, where another little lane branches off to the hamlet Stalbridge Western and the village Stourton Caundle:

Around blind corners and tight squeezes:

And driveways for the half dozen scattered dwellings:

Down “Giant’s Steps” – a series of steep dips and shelves through the trees:

And out onto the A30, main road to Sherborne and Yeovil:

When I rode the route, on a thursday afternoon, about 4pm, I encountered more than one vehicle per minute along the route — probably 100 to 150 vph, and twice that within the town — including a few big vans. Most were driven carefully and considerately, but a few came flying around the blind corners in quite a hurry, and it only takes one of those events to push most would-be cyclists (and walkers, and equestrians…) away.

How would I separate cyclists from these vehicles on a little country lane like this? By getting rid of 99% of the vehicles.

Britain suffers from a lack of clear distinction between roads, streets, and lanes, a distinction that is very clear in many European countries, including the Netherlands. Roads are for travelling between places; streets and lanes are places, and to be driven on only for property access and loading. In the UK we don’t have any such legal definition, but we have allowed streets and lanes to become roads: drivers use them as shortcuts between distant places and most people don’t feel comfortable cycling on them (or walking, or riding horses, or allowing their children to play on them). They are ratruns, and ratrunning is endorsed:

Motorists heading east on the A30 from Sherborne are encouraged to use this route — a country lane and a small town residential street — as a ratrun, cutting a corner between the A30 and A357. They would be silly to ignore the instruction. The main roads route is 60mph, except within the villages where it is difficult to do much more than 20, but it is 30% longer and features a set of a traffic lights, giving the ratrun the advantage.

The first thing to do with this lane is to take down the direction signs that encourage the use of this lane as a through road, and to remove the right-turn lane from the A30 (perhaps reusing it as a refuge for cyclists crossing from the separate cycle tracks that the A30 will need to have here). But that won’t stop the people who already know about the existence of the ratrun, or who are following instructions from their satnav. The lane needs to be made less attractive as a through route than the slightly longer main roads route.

At the very least, signs should discourage use — by marking it as unsuitable for through traffic. And it could be physically blocked with bollards, but there are valid, non-ratrunning, reasons for motorists to use the road: it gives access to six scattered houses, a farm, and many field entries. Rather than bollards, that sprawling junction with the A30, which encourages motorists to glide straight onto the lane without touching the brakes, could be rebuilt with a very tight and narrow turn and perhaps even a gate — with an easy bicycle bypass, of course — that has no purpose other than to give this route a time disadvantage against the main road route.

A short section of this Dorset lane is privately owned and so defined only as a public bridleway rather than road. You won’t see a motor vehicle here, though there’s evidence of very light farm traffic. (Unfortunately the short privately owned section is also poorly maintained.)

After volume, speed on the lanes needs to be tackled, both increasing the safety and comfort of walkers, cyclists, and equestrians, and again cutting the competitiveness of the route for motors. I don’t mean a speed limit: people will never do what they’re told, they will always do what is easy and what feels right. I’d replace the worn-out road surface with a fresh layer of smooth flat asphalt — but little wider than one normal car. That’s wide enough to comfortably allow two-abreast cycling and passing — sufficient for such a rural low traffic route. To allow access for wider farm and delivery vehicles, and to allow cars to pass, on either side of the smooth strip, an additional metre or so of very bumpy concrete, permeable, to allow Betjeman’s grassy edges to regrow — something a bit like this:

Drive slowly and carefully and you can keep your car on the road; try racing around those corners and things will get uncomfortable.

The network of lanes is often excessive: why not turn more back into unpaved tracks? This Dutch track has a paved recreational-standard (similar to the better Sustrans paths) cycle path alongside.

Within the town, the street should be treated the same as any residential street, limited to 20mph and, again, with visual, audio and tactile cues — a slightly louder, rougher surface, such as setts or brick, perhaps — that make breaking the limit uncomfortable. It should be marked as a no-through road for motor vehicles, even if it remains theoretically possible to drive the whole route. Lack of pavement in the village would be less of an issue with reduced traffic volume and speed, and a clear pedestrian priority.

Roads like these don’t need specific cycling infrastructure. They simply need to be turned back into the winding country lanes of Betjeman and the people-filled streets of Lowry, the way they were supposed to be, undisturbed by through traffic. Not just for those who might like to use bicycles, to get to work or school and to meet their friends and enjoy the countryside, but for the sake of everybody who lives here. The elderly folk whose mobility, and social interaction, is limited by a busy road that in places has no pavement. The town’s children, who have to use this street (on bicycles, if they dare) to get to the recreation ground. The folk out walking their dogs. The people whose property faces onto a road that is in constant use. 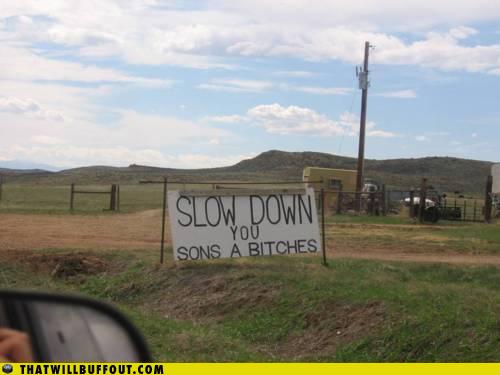 However much we might like to reclaim rural main roads from the fast cars and big trucks, there is unlikely to be political will for a long time, and dedicated cycling infrastructure is the only plausible solution to big roads as a barrier to cycling. There is demand for reclaiming town and village streets from the fast cars and big trucks. The country lanes are somewhere in-between, and I’m not sure which way public opinion would currently go on reclaiming the country lane. There are some that could quietly return to Betjeman’s standard without anybody noticing, but I’m sure motorists would kick up a fuss about the most treasured of their ratruns.

David Hembrow has written about traffic calming the Dutch countryside.

15 responses to “On country lanes”