Here, to keep you occupied while I work on something else, is a very short extract from a first draft of something else. It’ll need a bit of work. The context is that it comes amongst a long discussion of societal and judicial attitudes to dangerous driving, including the right to drive and our reliance on cheap road haulage and distribution with lax regulation, and illustrated with several of those case studies with which we are now all too familiar. (The pictures aren’t part of the extract, I’ve merely taken them from the Rail Safety and Standards Board Annual Safety Performance Report, and from STV news (warning: autoplaying audio/video)). 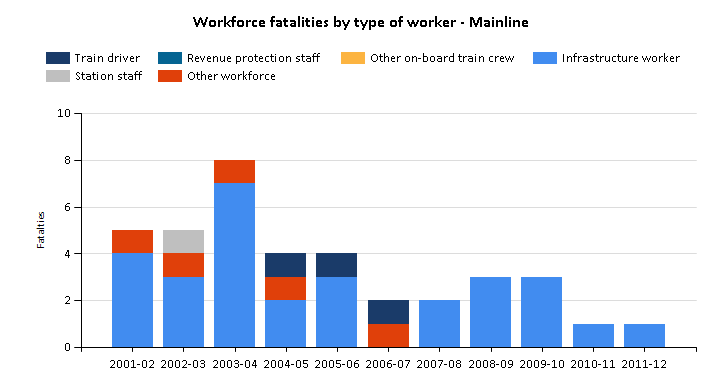 In 2011, a railway worker was killed. Just one. His name was John McInnes, an infrastructure maintenance worker who looked after lines in the north of Scotland. McInnes had thirty years of experience in a job that can come with all the hazards of working alongside fast trains, around heavy machinery, on high structures and amongst live wires. He was killed on the evening of the fourth of July 2011, while travelling to a work site on the Highland Main Line at Kingussie, only five miles from Crubenmore, where this whole story started. But McInnes did not die on the tracks. Accessing the work site by the A9 trunk road, his van and a car crashed with enough force to spark a horrific inferno that took firefighters 45 minutes to control.

This ironic tragedy highlights the already stark contrast between safety on the roads and safety on the railway. For more than a decade, railway workforce fatalities have been measured mostly at the low end of single figures, and five years have now passed without a single passenger or crew member having been killed in a train crash.

There wasn’t always such a profound difference between the safety cultures of the road and the railway. The navvies who built the Victorian railways were treated as expendable labour by powerful company owners who fought safety regulations, not only during construction, but also in everyday operation. Even when the railways were nationalised in the late 1940s, the toll on the workforce was still more than 200 every year. But strong unions demanding their right to safe workplaces, and public opinion demanding change when things go spectacularly wrong — as when major crashes occurred during the Railtrack era — has ensured that, these days, many layers of safety are built into every part of the railway.

The railway industry investigates not only all of the deaths on the tracks, but also the injuries and near misses below them in the Heinrich Triangle. The Rail Accident Investigation Branch makes extensive inquiries, consults the detailed operational records, and reconstructs events, leading to fifty page reports highlighting the lessons that are to be learned, the working practices to be revised, the rules which must be better enforced, and the new technology which should be adopted. The occurrences that it investigates are mostly what we would call accidents. Nobody was really to blame, and it is not the intention to find anybody to blame, only to prevent anything like it from happening again.

And so we have developed signalling systems which make it almost impossible to accidentally crash a train: train positions are automatically detected and the system keeps them apart by lengths of several train braking distances, refusing to allow the signaller to put trains on collision courses and automatically triggering the brakes if the driver fails to stop at red. Engineering work is checked and double checked and measured automatically by high-tech high-speed engineering trains on rolling schedules. In the event that engineering work must be carried out during live traffic, the engineering gangs work with dedicated trackside lookouts using flags and air horns to warn of approaching trains, while drivers sound their own horns until all workers have ensured their position is safe and signalled a clear acknowledgement in reply.

The railway has developed a culture in which staff at all organisational levels respect the fact that the railway is a hazardous work environment and that they must take seriously their responsibilities for the safety of their colleagues and passengers. But it did not achieve its enviable safety record simply by demanding respect and courtesy, and nor did it do so by imposing harsh penalties on workers whose momentary misjudgements ended in catastrophe. It designed a system which forgave those misjudgements: one which accepts that when humans are in control things will go wrong, so the system should be designed to allow humans to make minor mistakes and recover from them before there are any consequences.

In 2011, the Rail Accident Investigation Branch did not have to investigate a single worker death. John McInnes was on the road when he died at work, and when you work on the road, you’re still expendable labour. 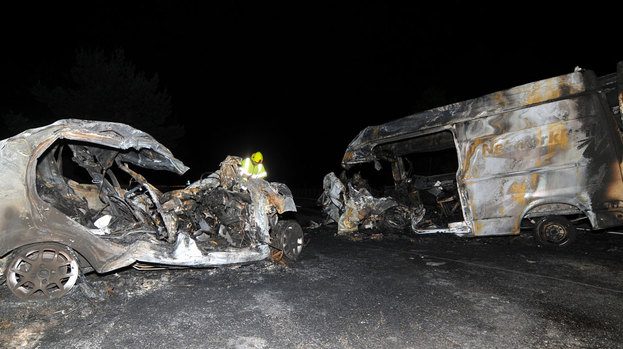 12 thoughts on “The telling death of a railwayman”