A quick update on this post, which was in turn an update on this one. Briefly: when I passed through Glasgow in the spring there were some cycle tracks under construction (and on streets that the Mayor of London, and many cycle campaigners even, would no doubt describe as “too narrow”), and, while they looked pretty good, the markings were not yet down, so there were some ambiguities about how it might work.

I will make a wider point about these tracks and more in a future post, but for now, this post is just some photos showing off what Glasgow has been getting — not just here, but at several similar routes in the city.

The good news: the crossing of side-roads has been done pretty much exactly right: the priority is clear, and if the markings weren’t enough, the contrasting colour should be: 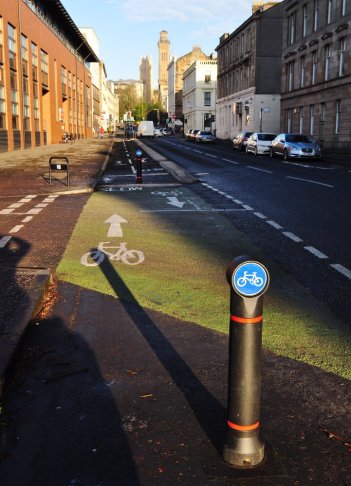 It’s not quite 100% perfect: as the coloured surface shows, there is still a rather generous sweeping curve for vehicles turning left onto the minor road to race across the tracks. But it’s plenty enough to make it one of the best examples of on-street cycle tracks in the UK… not that this is a great boast.

The not so good news is where the tracks switch from one side of the road to the other, at the same time as the road is intersected by another minor road. When I was last here, it wasn’t year clear how crossing to the opposite corner of the crossroads was going to work.

Well it’s a two stage crossing. The minor road is another cycle track priority crossing, with coloured surface to make it obvious, though this time the track first briefly jumps up and down kerbs (and slippery ridged paving that’s potentially dangerously aligned) over a wee patch of shared use footway. 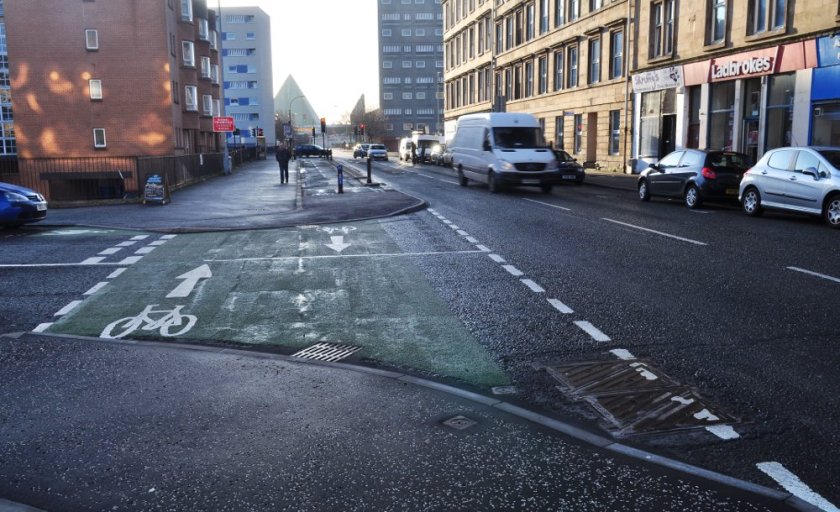 Then comes the crazy bit, a toucan crossing: 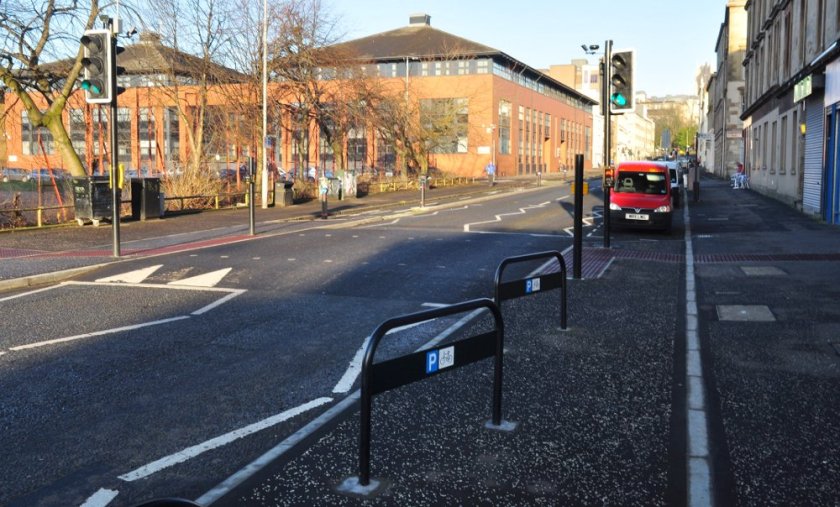 I’ve only passed this way a couple of times — at the tail end of the evening and morning rush hours — so perhaps I’m not the best person to judge, but a signal controlled crossing seems like overkill. Signals are expensive to install and power, so you’d expect authorities to be cautious about using them. But I just can’t work out why they’re needed here. The two obvious simpler solutions would be to have a non-signaled crossing with cyclist priority (and a zebra), as has been done with the minor side-roads, or a non-signaled crossing with motor priority. My impression of the motor traffic volume was such that the latter would not hold up cyclists any longer than the signals do. The former would obviously be preferred, and my impression of cycle and foot traffic volume was that cycle priority and a zebra would not hold up motor traffic much — though it would hopefully contribute to slow speeds on a street lined with shops, flats, and a playing field. I don’t know… perhaps at the height of rush hour it’s required.

My suspicion is that there is a toucan here simply because the old fashioned engineering rule book can’t accommodate the more obvious alternative.

That’s the only real issue with this new section of the tracks. The width, though perhaps not generous, is certainly sufficient. It would be nice if we were in a position where all those bollards were not necessary, but we’re not. Further on at the traffic lights, the tracks have their own dedicated phase (sadly without a detector that lets cyclists go first, as the Dutch might have):

But the full route isn’t yet complete up to this standard. To reach the city centre you are still directed on an ad hoc route along old footways-turned-shared-paths (signed as cycle routes but still without drop kerbs or toucan crossings) across the tangle of motorway slip roads and into the foreboding poorly-lit motorway underpass. And that leads me to my point…

12 thoughts on “Return to Glasgow again”