So the government is looking into some form of privatisation of the motorways and trunk roads that are still under their control — that is, the English Highways Agency network.

It sounds radical, it sounds like it could be frightening, it sounds almost like a parody. Actually, it’s boring. It’s probably even more boring than the familiar private roads like the M6 Toll and all our big motorway suspension bridges. It will probably turn out to be about as boring as the management of motorways and trunk roads in Scotland, where private companies manage and maintain the roads using railways-style regional franchises. You’ll know them by the names and emergency contact numbers plastered over the countryside on massive signs, but otherwise, the difference they make to the road user is entirely hidden: the roads are still toll-free and they’re still full of potholes. As far as I can tell, the main purpose of this kind of “privatisation”, like with Network Rail, is as a quick way of fiddling the accounts on the national debt. The extra billions that these things inevitably end up costing taxpayers are apparently worth it for the extra tens of billions of borrowing being kept off the national books, so that George Osborne can appear to be on trajectory for his arbitrary debt reduction target.

I wouldn’t worry too much about any implications for cyclists. England’s trunk roads network is way beyond the stage where anybody would dare cycle on it. We’re talking about motorways and motorways in all but name.

Where things might matter is with the prime-minister’s suggestion that privatisation might allow large-scale road construction programmes to recommence, with the idea that companies who build new roads could collect tolls on them capturing the headlines. It would be a shame if this happened. The Tories should try to think back and remember why they abandoned that approach last time.

But do we actually have to worry about a return to large-scale motorway construction led by private investors? I not sure we do. Quite aside from the many reasons that forced the Tories to abandon that unpopular policy last time around, I can’t imagine the private sector wanting to invest in a dying technology.

Local Transport Today reported this week that, despite private motor vehicle use in London being in near constant decline for thirteen years, the Department for Transport are standing by their prediction that in two decades time, traffic in London will be a whopping 43% above 2010 levels. Similar predictions are made for the rest of England, with 44% in the country as a whole. Given the exodus of young people from learning to drive, who do they think will be driving this traffic in the mid 2030s? What technology or fuel are they expecting to be an affordable means of powering all this traffic? Where do they think it’s going to go? This is the city whose streets are famously “too narrow”, whenever you propose giving some street space to something other than private motor traffic, but which apparently have room spare for 43% more of that.

What purpose could such absurd and crudely fantastical forecasts of traffic growth and confident rejections of the idea that motoring has peaked and is passing have? Is it perhaps meant to be the prediction in a predict-and-provide programme? Or is it less a prediction and more an ambition, for this greenest-ever-government? Are they pining for The Great Car Economy?

It’s true that car use fell in tandem with the economy, but if we want to stop the plummeting economy, we have to come to terms with the fact that both falls are merely symptoms of the fact that the cheap fuel that powered both cars and economy is a thing of the past. The lines on that graph simply aren’t possible these days.

Whatever. I can’t see private investors having such confidence in roads as a growth market that’s worth putting their money in. Unless someone can give them plausible answers to the questions like “by the time the road is built, who will want to drive on it?” and “how will they power their vehicles, and how will they be able to afford that?”, I’m not sure they’re going to want to take the risk on a the basis of a made up graph.

This quite aside from experience with the M6 Toll Road, whose operating income still doesn’t, and didn’t even during the economic boom times, come close to paying off the annual interest on its construction costs, despite attempts by the road’s owners to encourage new development around its junctions. Turns out that, despite their moaning, most people are quite happy to sit in traffic jams on the old roads if it saves a few quid on the toll.

But there is potentially another reason why Cameron might want to offload our motorways, beyond fiddling the national debt or encouraging new construction. The old Severn Bridge is falling down. The Scots are spending £790 million replacing the Forth Road Bridge (though nearby infrastructure projects suggest that the final bill might end up at £7.9 billion). Who knows how much the emergency repairs to the Hammersmith Flyover will end up costing London? The main motorway and trunk road construction boom began in the late 1950s, and a big chunk of engineering is about to reach the end of its design life, corroded and crumbled by rock salt, ice and billions of truck movements. What if privatising the motorways is just preparation by central government for distancing themselves from the difficult decisions of whether to repair, replace or abandon our collapsing concrete highways in the sky?

I’m on the road: here’s one I prepared earlier. Don’t expect prompt comment moderation, replies, or corrections of embarrassing mistakes.

It’s something of a departure from the established definition of “news”. East Coast revised its timetable way back in the spring. They added a little extra time to some journeys — a dirty trick that allows them to inflate their performance statistics and avoid having to give refunds to passengers on trains that run late, by redefining “late”. At least, that’s how the newspapers would have you believe it.

The railway industry will point out that it’s a bit more complicated than that. In an extremely complicated network with a packed timetable, if anything goes just a little bit wrong, there can be massive knock-on effects and the entire timetable will fall apart. And in a system catering for millions of passengers on thousands of trains, things always will go wrong. Doubly so in a country that’s reluctant to invest in maintaining its infrastructure. The timetable padding is there to allow recovery from tiny problems before the tiny problems bring the whole system down. Think of gaps in a domino rally if that helps.

Timetable padding is a good thing, because reliability is more important than speed — despite our obsession with the latter. People taking an East Coast service between Edinburgh and London shouldn’t care if it’s timetabled for 4:04 instead of 3:59, but they certainly will care if it’s five minutes later than they were expecting and they miss their connection or walk into their important meeting late. 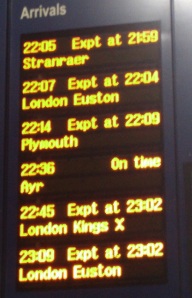 But of course, it’s a bit more complicated than that. Performance statistics are generally counted at the terminus of a route, not at the intermediate stations (though companies do still have some incentive to be on time at the intermediate stations, because passengers can claim refunds for very late arrivals), and the industry’s defence of padding might be more acceptable to passengers if it weren’t for the fact that padding is so often added there, right at the end, where the statistics are counted. South West Trains from the Westcountry idle for five minutes on the approach to Waterloo; intercity trains routinely reach Glasgow with ten minutes spare (but spot the 17 minute late train from King’s Cross — it’s that state-run rail company, East Coast). Thus the reliability defence only applies to those going to the very end of the line. Got a tight connection at Clapham Junction or Carlisle? No such luck. As well as benefiting more passengers, padding that is evenly spread can, in absence of disruption, take the form of slower speeds, reducing energy use, emissions, and wear-and-tear.

But it’s probably more complicated than any of that because clever tinkering always has unintended consequences — side-effects. I don’t know what the side-effects of schedule padding are, because I can’t find any research on them, or any evidence that anybody has ever thought to do any research on them. But I can make some guesses at where might be a good place to look for them. As the consequences of minor delays are reduced, will staff get less strict about departure times — a little less rushed, a little more forgiving to the late passenger running down the platform — and would that be a good or a bad thing? Might such adaptive behaviour completely absorb any benefits that timetable padding ever had? Might train company management, in times of high fuel costs, pressure drivers into adapting speed to reach the terminus on time at the expense of arriving late in low-patronage intermediate stations, where performance is less important to the company? What effect does padding have on people’s desire to use trains over alternative modes? Speed shouldn’t be important, but speed sells — does the extra five or ten minutes advertised time affect people’s modal choice? Does arriving at Glasgow ten minutes early impress people, or are they annoyed that they have to wait around longer for their connection? Will regular passengers adapt and expect to arrive in Glasgow earlier — thus being inconvenienced on the occasions when their train is merely “on time”? What does a five minute wait just outside Waterloo — when everybody has packed their bags, put on their coats, and stood in the aisles anticipating arrival — do for the railway’s image? Our impression of the railways is surely affected by unscheduled delays, but does padding do more good or more harm?

I have no idea, because as far as I can see, nobody has really explored the subject.

What I do know, is that railing at state run East Coast for schedule padding is absurd. They copied the idea from the all the other (privatised) train operating companies, who in turn got the idea from airlines. It would appear that a memo went around the right wing newspapers to find reasons to bash state run East Coast — the caretaker organisation that bailed out its failed privatised predecessor.