A new bridge over the Thames in East London would only benefit ‘former Tory MPs’, a Newham councillor has claimed.

Councillor Airdrie Dalden is objecting to plans from Transport for London which include a bridge between the borough and the Royal Borough of Greenwich on the south of the river.

Quoting the example of journalist Matthew Parris, councillor Dalden said: “The vast majority of people currently crossing the Thames here are former Tory MPs in swimming trunks. Women of any ethnic group who wish to wear modest clothing, and I count myself in that category, are not going to put on a swimming costume and cross the Thames. Swimming is a discriminatory form of transport.”

Parris was criticised by the Port of London Authority in 2010 after writing about his experience of being swept a mile upriver when swimming across the busy commercial waterway at night.

Mayor Boris Johnson claims that the new Thames Gateway Bridge across the river would link the transport poor Thamesmead estate and Woolwich development area in Greenwich with residential and redevelopment areas around Beckton and the Royal Docks in Newham, creating opportunities for one of Britain’s most deprived boroughs.

But Councillor Dalden told AWWTM that the money Johnson proposes spending on the bridge would not “benefit every aspect of Newham, which is an ethnically diverse borough.”

“You look around and of the people who are crossing the Thames here, they do not belong to wider ethnic groups. The majority of swimmers are former Tory MPs like Matthew Parris and Boris Johnson. Fact.”

Transport for London are now considering a compromise solution which will involve building half a bridge.

The shocking death of 9 year old James Quackenbush has reopened the debate on whether flame-retardant motoring overalls should be compulsory. Stars from the world of motoring should stand up and take a lead on the issue.

James Quackenbush is, of course, just one of several people to have died on Britain’s roads in recent weeks while not wearing a full fireproof motoring bodysuit. Margaret Blanshard we now know died of a cardiac arrest after her Ford Fiesta collided with a lorry on the A90 in Fife; the 72 year old was too old fashioned to update her wardrobe to include a simple set of motorist’s aromatic polyamide fibre coveralls. Meanwhile, charges of causing death by dangerous driving have been dropped against 24 year old Wayne Acocks of Essex after it emerged that the driver of the Skoda Octavia that was hit by the stolen Audi R8 Acocks was driving had not been wearing motoring overalls — the Skoda driver died in hospital from multiple major trauma hours after being airlifted from the scene of the horrific high-speed smash.

But it is the case of James Quackenbush that has renewed the urgency of calls for a change in the law. It is one thing for a grown adult motorist to choose to throw away their life by not taking the simple step of donning a set of motoring overalls, but to allow a child passenger motorist to go without is quite another. AWWTM phoned grieving mother Kate Quackenbush — who left Queen Elizabeth Hospital in a wheelchair this morning — to ask how she felt as the woman responsible for the death of her own son, but the child killer declined to comment. As has been widely reported, the boy was not wearing motoring overalls when he died instantly from serious crushing injuries as the single mother’s 1998 Peugeot 205 was impacted on the passenger side by a construction waste lorry whose over-hours driver had momentarily lost concentration at the busy crossroads.

As a motorist myself, I can’t see any reason why you would not wear a flame-retardant motoring suit. I can tell you, I was very grateful I was wearing mine when I got into trouble recently. Luckily it only turned out to be a minor prang — a smashed light and a scraped panel — but I dread to think how differently it could have turned out had I not been wearing my lifesaving overalls.

Naysayers point out that most car crashes do not involve a fire, and that those which do are usually of such a severity that a flame-retardant outfit is unlikely to be of much use. To those critics we say: you’re free to make that irrational choice to go and kill yourselves if you like. For now.

And yet still many of the youngsters newly attracted to the pastime are not making the right choice. Until such a time as the law is updated, there is undoubtedly a role here for top stars from the world of motoring to set an example. Fireproof overalls have, of course, been compulsory in the professional sport for many years now. But amateur motorists need leaders to look up to. It was gratifying to hear Lewis Hamilton state his support for a change in the law in a recent press conference, but why isn’t Hamilton doing more to encourage youngsters and to help show that flame-retardant boilersuits are not just cool, they’re an essential part of any motor to school or weekly drive to the supermarket.

Our sporting heroes have a simple duty: to set an example. They must do the right things, and let people copy those right things. And one of those oh so simple little things is wearing full body flame-retardant overalls at all times behind the wheel.

By those ZaNu Labour National Parks people, telling us where we can and can’t drive our lovely cars. Do these gortex goons, so-called hikers, pay tax (and insurance!)? Do they expect us to use the expensive taxpayer-subsidised trains with the peasants? Perhaps if the guverment laid off the poor hard-done-by Motorist and let them use they’re common sense instead of trying to micro-manage everything than every one would learn to drive safely. And if the guverment doesn’t want people driving on Snowdon, why weren’t their more obvious signs saying so?

The petrolhead community have long fought to expose the conspiracy behind speed cameras. In the name of transparency and ending The War On The Motorist, the DfT have collated some of the data on speed cameras. And guess what? At a couple of camera locations, there have been more injuries. With over five thousand cameras and data reported for both minor and serious injuries, what are the chances that campaigners who scour the data will be able to find one or two camera locations where one or the other measurements happens to have risen? It must be a significant result. 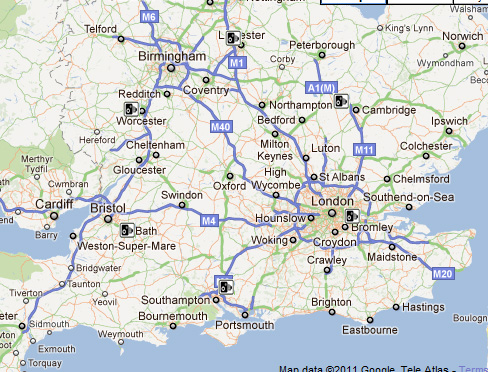 Don’t you see what this means? 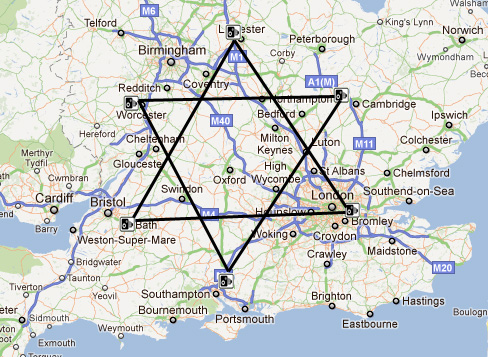 This isn’t just any conspiracy. This is a Jewish conspiracy!

Based on an idea from Stephen Colbert (unfortunately I can’t find a video of the time he found a star of St David in CNN’s weather map), and with a tip of the hat to Matt Parker’s alien navigation system.