I wrote this thing a year and half ago but never quite got around to shaping it into anything I was quite happy with. Well, since the BBC have come around with yet another “what is stopping women cycling?” story, I figured I’ll never finish it and may as well get rid of it…

Another tweet scrolled past me this evening asking why a segment of the UK population doesn’t cycle.

Is cycling a 'white' thing? Help us find out what stops people from BME groups cycling: Do our survey & pls rtw https://t.co/AhO2P8QWPq

It’s certainly an admirable exercise, trying to address inequalities in access. And there are certainly inequalities to address. But there is little to learn about what the inequalities are, or what the solutions to them might be, by comparing current cycling rates between different populations, or by asking the question “why don’t x cycle?”.

That’s not in any way to say there aren’t inequalities of access, or to dismiss the additional barriers that women and minorities face, or to belittle the diverse ways that different people and populations can experience the same barriers. Only that when it comes to “why don’t people cycle”, the biggest concerns by far are the same for everyone.

Here is an entirely hypothetical society that we can imagine, with some entirely made up data for different populations in that society: 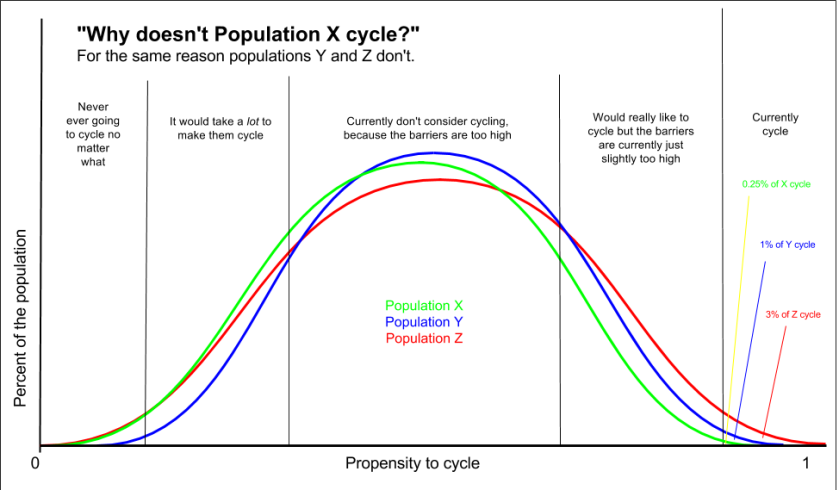 Some of the people would never ever cycle, no matter what the environment for it were like. But for the vast majority of people in all demographics, there are circumstances in which they would happily cycle, were the environment different. There are barriers stopping them, but they are only barriers in the context of the prevailing environment.

Indeed, in our hypothetical society, while Xs are currently substantially less likely to cycle than Zs, if you radically change the environment to shift the cut-off point to the left, the proportion of Xs to Zs converges until Xs slightly outnumber Zs.

Perhaps in our hypothetical society, Xs on average actually make more of the types of short journeys to which cycling is inherently the most suitable form of transport — but compared to Zs are typically burdened by this society with other duties, expectations or threats to their safety which make cycling extra unattractive in the prevailing conditions.

Understanding the burdens Xs face may be a worthwhile exercise in itself. But they’re not the answer the question “why don’t x cycle?” — and addressing them alone won’t change the fact that, just like everyone else, they overwhelmingly don’t.

So Glasgow has been building what are (by our very low British expectations) pretty good cycle routes. Far from perfect, but a league above the usual crap cycle lanes. And in the Highlands, routes (primarily recreational) suitable for pootling families and hardcore tourers alike are taking shape. But this progress is under threat from cuts proposed in the budget bill that is currently going through the Scottish Parliament.

The Caledonia Way between Oban and Glencoe is not yet complete (and Sustrans never did get back to me regarding the status of funding for the final third), and patchy bits of a route like this is barely better than nothing: if you were put off by the fifty kilometres of main road, you’ll probably still be put off by the remaining fifteen. Nice to have for the 1% who were already cycling, but no use for growing that 1%. And by ending at Glencoe the route currently misses the trick of linking two railway towns, Oban and Fort William, 20km beyond Glencoe up the A82 trunk road. There is little sign of activity on there, or anywhere else on the Campbeltown to Inverness route, outside of the Oban to Glencoe section.

Glasgow’s routes are also currently incomplete, though somewhat safer as beneficiaries of the Connect2 project — a £50 million National Lottery grant awarded to Sustrans after a public vote (who says the public isn’t interested in funding cycling?). However, Connect2 is a one-off project that will only fund these few routes, and whether to move to the next level — from routes to the network, which the Dutch experiments of 30 years ago demonstrated to be where the really big gains can be made — will be a decision for Scottish politicians.

And politicians in the SNP administration now intend to cut their support for cycling — support that is already mediocre compared to that of the National Lottery, and embarrassing compared to the continent. The budget for “active travel” — cycling and walking — is to be cut from “pocket money” last year to “spare change” next year. At a protest in Edinburgh last month the transport minister in the Scottish government, Keith Brown, tried to blame the Westminster Treasury, who have forced a cut to the overall budget for Scotland. The crowd showed remarkable restraint in the face of such blatant dishonesty. Everybody there already knew that, despite Westminster’s cuts, Scotland’s transport budget is to rise, with additional spending on motorways and other old fashioned road widening projects on a scale that will dwarf the active travel budget.

How Scotland chooses to spend money on transport is obviously important to its residents. Glasgow especially feels the problems of car centric planning and car dependency greater than most of the UK. The city occupies unfortunate positions in league tables of health and deprivation, and while some would like to pin all of Glasgow’s health problems on personal failings involving Buckfast and deep-fried Mars bars, we know that a crucial factor in our health is the environment in which we live and extent to which it allows us to live healthily. For several decades the environment in Glasgow has been one in which choosing to walk or cycle has been made unattractive and difficult, and in which those who do make the choice will spend their travel time stewing in the fumes that drift off the motorways.

That’s not to say that everybody chooses to sit behind the wheel instead. Like the rest of the UK, a lot of people simply don’t have that choice — though you might be surprised to hear it given the reluctance of our media and politicians to acknowledge the existence of people who have never been able to afford to own cars. In fact more than half of Glasgow households are car free — one of the highest rates in the EU. A lot of those households are therefore denied many of the economic, educational and cultural opportunities that arise in this world built for drivers, at the same time as having to deal with all of the consequences of the motorways that thunder through their neighbourhoods. Glasgow’s transport environment has been propping up inequality as well as ill health, and the new budget proposes extending the out-dated policies that created that environment.

In a time of austerity and struggling economic recovery, what Britain generally, but Glasgow especially, desperately needs is a cheap, easy and egalitarian means for people to access economic opportunities, not more motorways on which those who can still afford it can burn wealth in the form of oil.

But how Scotland spends its money on transport is important to all of us, even if we don’t plan on using Scotland’s transport, and for the same reason that the outcome of the upcoming election in London matters to the whole UK. Devolution of power over transport planning and investment enables the sort of radical new policy directions and innovations that transport secretaries at Westminster have been unable to achieve in decades. In Scotland, the previous Labour administration used that power to make some notable reversals of the Beeching Axe. In London, Ken Livingstone used it to introduce the Congestion Charge, with its associated improvements to buses, ticketing and streets. In Wales, a cycling bill is in the current legislative schedule, and it looks likely (though details are not yet available) that if passed this would introduce new responsibilities and tougher standards for Welsh local authorities to provide for bicycle journeys, and may make changes to the law where the law currently stands in the way of quality provision.

The devolved administrations get to invest, experiment and innovate in a way that doesn’t happen in the rest of the country. But the rest of the country will follow eventually, when the solutions are no longer experimental or worryingly innovative. These administrations are the trend setters, so when they choose to squander their opportunities on old fashioned motorways instead of the transport we need in the 21st century, the whole country is waiting behind them doing the same.

“We stand now where two roads diverge. But unlike the roads in Robert Frost’s familiar poem, they are not equally fair. The road we have long been traveling is deceptively easy, a smooth superhighway on which we progress with great speed, but at its end lies disaster. The other fork of the road—the one “less traveled by”—offers our last, our only chance to reach a destination that assures the preservation of the earth.”
— Rachel Carson

I don’t think that the road we’re on is easy. I don’t think that, as Gordon Brown said of tackling climate change, “taking this path will not be easy for any of us.” Solving our problems, if done right and done early, doesn’t make austerity, it makes a better, fairer, freer, happier and healthier world.

It’s not easy, for example, to carry on building a city where people don’t want to live and work, don’t want to spend their money or raise their families. A London so choked with cars, trucks, and taxis, and the noise and fumes from them, that people give up on Oxford Street shops, West End cafes and East End markets. A London that creates no opportunities for its children, and shuts away its elderly. A London that people long to leave, and which people do leave, as soon as they can, for the south coast or the countryside.

I don’t even think that the LCC’s road is the best possible: the Danish-influenced design is clearly far superior to the road we’ve been on, but even the Danes haven’t quite designed streets for everybody to the extent that the Dutch have.

(And that’s why I disagree with the reason given for the Danish model — that it’s more achievable in the UK. If the Dutch model can appeal to a greater diversity of would-be-cyclists, as the demographics of Dutch and Danish cyclists suggests it does, it should be more achievable. It is true that the Danish model is less alien to us and so easier to comprehend when looking at rhetorical drawings, though.)

We’re on the road to disaster, but we could turn off at any time, build a new road to one of any number of superior designs, Dutch or Danish, they’d all be smoother than this one. All it would take is for Boris Johnson to man up, admit that he has been going the wrong way, and to stand up to the powerful few who are invested in the road to disaster.

Tell the mayor to do it, today at 5.45pm, Blackfriars Bridge.